Skip to Content
Home Blogs Life in Tucson Tucson Festival of Books: The End of Spring Break
by

Hi, I know I should’ve posted bout this much earlier, but I just couldn’t make time. *Sigh My spring break has been over. And it was since about two weeks ago. The spring break in my university this year started much earlier. Usually it’s at the mid March or the end, or the begginning of April. This year it was so much earlier, on 5-9th of March. And of course, it went by so quickly.

I didn’t go on traveling during this spring break. A friend was actually inviting me to go to on a short getaway to Antelope Canyon and around (on March 9-11), I really wanted to join, but, well, there was a lot going on. I had to attend the monthly meeting with the Permias/ Indonesians. Then there was also this Tucson Festival of Books. Well, I don’t know. Had I wanted to, I could just make an excuse not to attend the meeting, other Indonesian students would be present anyway. But I couldn’t. I felt responsible for it. I just couldn’t leave because I wanted to “have fun traveling”, right? And about the festival, it was held annually, so if I skipped this year’s event, I’d still be able to go next year. And I have been to one anyway.

I don’t know; I guess I was just worrying about my papers and assignments. I was scared that I wouldn’t be able to finish them on time. I had had so many plans for spring break: doing this, reading that, finishing those, etc., trying to catch up or get ahead. But, well, I couldn’t really accomplish them all. I guess I was stressed, so I spent much of the time sleeping. Sleeping, eating, SNS-ing, etc. It felt like a waste, though I did several things for my study; I just felt that I could’ve done more. I mean, even one of the papers that I planned to write was just finished last Friday, right when it was due. So late, right? Gosh, I started hating myself now. Just what have I gotten myself into? What have I become?! I’m so sorry for myself. My spring break wasn’t as productive as I had wanted it to be.

Ok, now I might be ranting, and it’s so ironical after I said all those things about self-acceptance or forgiving oneself. But, well, sometimes we need it. I think I need it. There are times when I need to reward myself. There are times when I have to slap some sense into my head. I need to get a good hold of me myself. Life isn’t always kind and sometimes we need to be hard on ourselves. As long as not all the time 😁✌️ 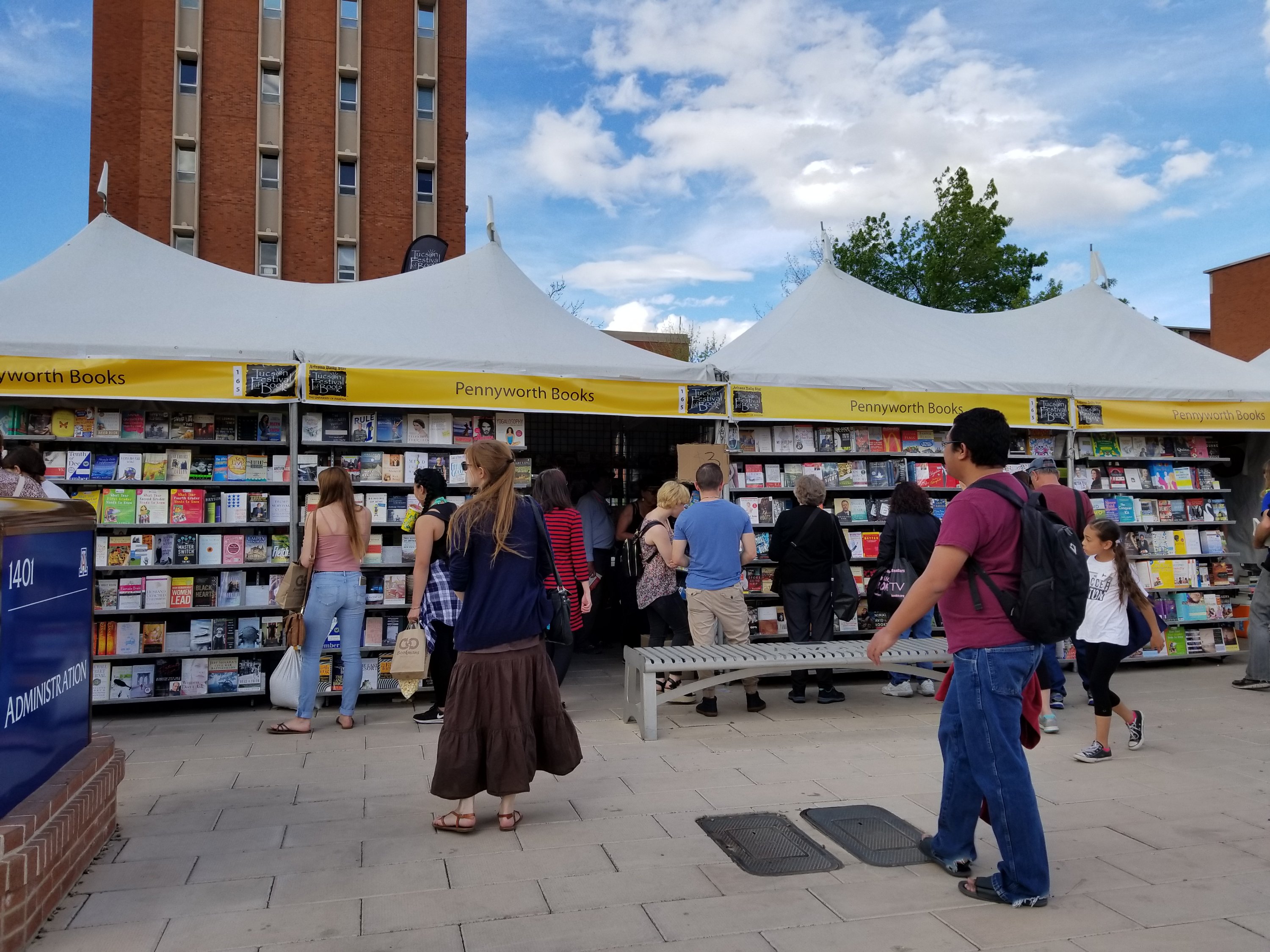 So as I have said earlier, it is an annual event in Tucson. It’s actually one of the biggest events in the states, not only in Tucson or Arizona. And guess what? It’s held in UA Mall, right in my campus 😊❤️😍 Many publishers had booths, including some well-known writers that were invited to the event to talk about the books they wrote and by whom you could get your books signed. There were also art and cultural performamces. And of course, there was also food and beverages. Not all were free, but you could get whatever you needed 🙂

So, this year I really wanted to go because I went there only once in 2016 and I lost some photos because my phone was broken at that time. (Not sure why I didn’t remember going in 2015 🤔). But, well, like I said, I felt like having no time to go due to that stressing-out-about-my-assignments thing. But it was held for two days, March 10-11, 2018. Thus, I decided to go on March 11, on which day I also had the meeting with the Indonesians. That way I didn’t have to go out twice. Yeah, by now you must have guessed that I am a homebody. I really don’t like going out like that. I have to clean, I have to dress up, I have to be “decent”, and you know I am slow, so all of that takes a lot of time, so no, I’d rather stay home and do my stuff.

Well, actually I had no intention to buy anything 🙈😅 I mean, you know that jUwa and the word “buy” simply don’t collocate, right? 🙈😅✌️But there were some discounts and I was tempted 😂🙈✌️ Thus, after Permias meeting (the meeting with the Indonesian familys and students), I went around the Festival Books of Tucson. I was kinda late actually. I mean, it was the last day, and by the time I finished the meeting with Permias, the booths were about to close. Fortunately, I still got to see much of it. It was fun ❤️

Then I saw this booth selling books for $1. My friend saw this Japanese dictionary and thought I might be interested since I was learning Japanese. And I went “wild”. After seeing the $1 prices, I only intended to buy two books aka spending only $2. But, well, I got attracted to 4 different books and couldn’t really choose, and I was like, “It’s ok, it’s just $4, you have your cash in spare, it doesn’t count as spending, because it’s already counted as a spending when you withdrew it from the ATM.” So, yes, I took 4. BUT, when I was about to pay, the seller said that because I bought 4, I could get 1 $2-book for free! Apparently, when I bought 2 $1books, I get 1 $1book for free, and because I bought 4books, I got 1 $2book for free. Alas, I was confused again. I couldn’t choose! I asked my friends which book I should choose from the two I was interested in. Then the seller approached me and said that I could have both of them only for $1. So for all the 6books, I only paid $5!!! Man, I was sooooooo happy! They should’ve held Tucson Festival of Books more often or longer!!! But actually I’m glad they only hold it once a year and only for two days, otherwise I’d go broke and bankrupt 🙈😂😅✌️✌️✌️ Well, I didn’t get to get good books with such prices in Indonesia, so of course I want to buy them all. If only I didn’t think of my baggage when I return later, I would have bought a lot of books! But maybe not, I need to save. I really want to travel to more and far away places 😍❤️😍

Then we were hungry, but I hadn’t prayed yet, so I told my friend that I’d go to Islamic Center of Tucson for praying first. But then there was a small restaurant across the building. My friend said that the owner of the restaurant was the principal of the Sunday school in which she volunteered. We decided to go there, I had no time to cook anyway. And the restaurant was good because we didn’t need to worry about whether the meat was halal or not because the owner was a Muslim 😊🤗

And guess how much I should pay? For food and drink, I paid $13. Actually it was standard and not that expensive. That’s how much we’d pay if we eat in the states. But, well, $13 is almost 3X the prices of the 6 books I just bought in the festival! 🙈😅 And, I know I shouldn’t keep comparing this, but I just need to say it: It’s the other way around in my country 🙈🙈🙈 No matter how much discount you get in a sale, the price of one book would be enough to get a decent food in Indonesia. The prices I’d pay for 6books on sale in Indonesia can be used to buy at least two or three kinds of meals along with the drink in my country. But here? The prices of 6books were not enough to eat one kind of decent meal with the drink 😂😂😂 What a joke! That’s why I’d prefer spending my money on books here. I can always cook for my food 😁

So that’s it. That’s how my spring break was spent and how it was ended. Right after the Tucson Festival of Books, we went back to the routines of having class and stuff. Well, we have around one and a half month more to finish this semester, let’s just hope and pray that everything will work well. Amen 😊🙇‍♀️🙏🙇‍♀️😊