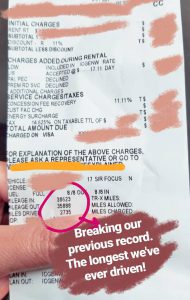 This winter I was road-tripping with my friend in the US from Dec 19-Dec 26, 2018. We wanted to go to warmer places since it was winter but we’ve visited most of the warm states, so we didn’t really have that many options. Well, we could have been to another country like Mexico City in Mexico or explored another state like Hawaii, but it was expensive around the times my friend could make it, so we decided to go for cheaper options, i.e. visiting the states we’ve never been to in spite of being cold. We just hoped that it’s not going to snow because we weren’t experienced enough to drive in the icy or snowy road so it could be dangerous, in addition to the cold that was surely not pleasant to deal with. And thankfully it wasn’t that snowy when we were going so it’s safe. So, well, after calculating everything, we came up with this plan for the cheapest option. We flew to Oklahoma, rented a car, drove through Kansas, Iowa, South Dakota, and drove back to Tucson through Nebraska, Wyoming, Colorado, and New Mexico. Our main destination was mainly Mt. Rushmore, so we just enjoyed driving seeing different view on our routes and stopped by in different cities using AirBnB to rest and stopped at interesting places along the way. We drove during the day and rested in the next destination for a night before continuing to the next city. We stayed at Oklahoma City (OK), Kansas City (MO), Sioux Falls (SD), Rapid City (SD), and Fort Collins (CO). We originally also planned to stop and stay in Santa Fe, NM, but we decided to skip it and headed straight back to Tucson, AZ. Hence, we arrived in Tucson in December 25, very early in the morning (around 2-3ish am), much earlier than we initially planned. But, well, it’s the longest road trip we’ve ever done. We broke our previous record by driving 2735 miles (4401.556 km). We used to drive 936miles for 6 days in CA, 1099miles for 2 days in AZ, and 1300ish for 2-3days in AZ, UT, CO, NM. Well, it’s kinda fulfilling. LoL

But, well, here are several things that I want to remember.

1. I took charge of the flights and AirBnB reservations, and my friend took care of the rental car since she had the license while I only had a permit (that’s the kind of license in which we’re allowed to drive only if accompanied by someone at least 21yo who has the license, i.e. I cannot rent the car). My friend made the reservation online like we usually did so it’s easier to pick the car when we arrived in the airport in Oklahoma City. But guess what? When we were picking up the car, my friend’s credit card was declined. And oh, there was this policy change about renting a car here in the states. Previously we could use Debit/ATM Cards to rent a car, but for some reason, they now want only credit cards. They would accept debit cards only if we can show a return flight (round trip), which was a problem because we only flew one way and planned to drive back with the rented car. So, we were messed up. My friend tried to contact her credit card company but it just didn’t work. And I don’t have credit cards myself so I can’t help (not that they’d allow me to use it if I had one since I wasn’t the one renting the car). So you see, we had a huge problem there, i.e. we couldn’t have the road trip if we cannot rent the car! But, well, I guess I was lucky, we were, i.e. angels do exist. The lady in the rental car actually talked to us and somehow we could figure things out and my friend could use her debit card. She even gave us discount so it’s cheaper! We didn’t know about that before. But for your reference, you could get discount as a student/someone working in a university. If the universities are listed in their system, then we can get the discount. It’s great. God bless that beautiful lady. I really hope things are easy for her and that it’s easy for her to find happiness seeing how kind she has been to us! So yeah, at the end, we could rent the car. Safe!

2. I was supposed to take this chance to enhance my driving skills, but of course I couldn’t be allowed to drive all the way because it could be dangerous for both of us – and for others along the roads. So, well, my friend drove most of the time. I finally got trusted to take the chance and drive on the second day, from Kansas City to Sioux Falls. And this happened. We were driving in a highway and my friend suddenly said she needed to go to the restroom. Hence, since there was an exit nearby, I decided to take it and went to the nearest gas station. Besides, we needed to fill up the car anyway. But when we were stopping at one of the gas station stalls about to fuel our car, a guy was approaching my window. I was scared. I was not scared that he was a bad guy, no. I was worried that maybe I have made a mistake, maybe it was actually a spot he was about to take and I snatched it from him. You know, things like that. So I was scared and of course I was all to apologize. The guy, however, waited for me to lower my window, so I did. He said and asked me if I realized that I took over his car when I was taking the exit ramp. At that time I really did not know what he meant. I was sincerely and seriously processing and trying to understand what he was trying to say. But then it clicked on me, i.e. when I was taking the exit ramp, I needed to change and take the right lane, and there was this car (apparently his car!) on that lane. Though I have made sure that it was safe to turn and take the exit, apparently it was too close to and for him and thus it was dangerous. Because it’s a highway, the speed was bit higher/faster than other roads so taking a sudden turn with another car close by can lead to crashes. I realized I was wrong so I genuinely apologized and said sorry. I would not defend myself here. I would totally understand if he yelled or cursed at me. I might have cried feeling sorry but I deserved that so I couldn’t really complain. But perhaps the guy can see how terrified I looked (or how sincere and genuine I was 🙈✌) so he didn’t yell. I could see that he was upset but he chose to restrain himself for saying nasty things to me. Instead, he said, (more or less), “You know I got a little girl with me. You need to be more careful.” I understand how mad he must have been, having his little girl at danger because of my careless driving. I repeatedly apologized and thanked him for telling me about that. I said I’d be more careful. He seemed to understand and left. I felt relieved. I felt relieved that I didn’t crash into his car, that nobody was hurt or injured, that even though he took all the trouble to follow me to tell me all that, he said it nicely and didn’t yell at me. I was truthfully thankful. (Dear Sir, if you read this, please know that I am sorry, and thank you for not yelling at me). I felt – and still do feel bad. It actually made me scared of driving. If I drove alone, crashed and died that might be nice but then somebody else might be hurt, so no, it’s not nice.

And previously when I was driving in Lansing, KS to get a postcard, a lady yelled at me when I was trying to get out of the car after parking in the gas station. She yelled, “Don’t hit my car!” I was shocked, because my friend had said that even though my parking was not perfect, it was okay. I didn’t park too close to her car either. I was opening my car door slowly, too so it wouldn’t hit or damage the car (the lady’s car) parked next to ours. So I was scared. (I guess I really have an issue dealing with people. Maybe that’s why I prefer being at home alone on my own). So I stayed in the car, my friend had already left when the lady yelled because she was in a hurry to go to the restroom. The lady parked her car a bit farther from ours. Then I got out and apologized to her. She didn’t say another word, just nodded. I think she was still mad, but I appreciated that she didn’t make further fuss about it. (So maybe this is also why I love traveling, to find people being “nice and kind” to me). Well, you might say she’s not nice or kind enough. But you know, when I said sorry, she could’ve said nasty words, pointing out how bad my parking skill was, etc. but she chose to nod and keep silent. It made me somehow feel better. So to me, she was somewhat nice and “kind”. And, oh, after that incident with the guy whose car I took over in the ramp, I lost my confidence to drive. I felt really stupid. I was scared. My friend asked if I still wanted to continue driving to Sioux Falls, but I guess she couldn’t trust me anymore, so even though I still wanted to drive so I could get to practice more, I gave in and let her drive since it’s safer that way, and something else happened. I will write it in another post because this post has been too long…