Skip to Content
Home Blogs Travel A pursuit of postcards: Is it still a thing?
by

I might have said this before but when I go traveling, I try to get a postcard and send it to myself. Hence, one of our purposes during our winter road trip was to get a postcard from each state we visited or passed by. My friend didn’t send it to herself but she still liked to get one for her collection. Thus, we planned to get postcards from Oklahoma (OK), Kansas (KS), Missouri (MO), Iowa (IA), Nebraska (NE), South Dakota (SD), Colorado (CO), and New Mexico (NM). I myself had been to New Mexico and Colorado before but at that time I hadn’t come up with the idea of sending a postcard to myself so I thought I wanted to do it in my current winter road trip. However, it wasn’t that easy. I guess postcard isn’t really a thing anymore. We stopped at several gas stations, we went to post offices and book stores, but most of them didn’t have it. It’s just a sheer of luck that we managed to get some postcards when we went to some of those places.

When we were in Oklahoma City, for example, we couldn’t find an Oklahoma postcard. Then we decided that maybe we could get it in Tulsa, OK since we planned to drive by the city. We went here and there, post office, gas stations, bookstores, CVS, Walgreens, but to no avail. And we finally we went to another gas station though we weren’t really hopeful anymore. Surprisingly, we got it there! First I tried to search for it myself when I first entered the store, but I couldn’t spot it. So I asked the guy in the cashier if he had postcards. He initially said that he used to do that but not anymore. I was about to return when he said that he might actually have still have some and pointed to a corner. “Maybe you could check there?” he said. I asked, “Where?” And he pointed out to a spot there and when I saw it I spontaneously answered, “Yes, it is there!” And I picked one for myself. I was jubilant. I asked him how much it was but he wasn’t sure. Haha He said maybe $.99. He thought it’s how much it was in other stores. Well, actually it’s more expensive that the postcards I usually bought. But I didn’t tell him that because I was just glad that I finally found one. Then I returned to the car and told my friend about that and she went to get one herself while I was writing and stamping my postcard to be put into the USPS box. Well, I had prepared the stamps in my phone case in advance so I don’t have to go to the post office whenever I want to send a postcard ^^

And this ordeal of trying to get a postcard in the city we visited didn’t end there. In Kansas City, we were quite lucky since we found a lot of them in a CVS store. My friend first found it, and so we bought it there. It was pretty cheap too. It was only $.20 excluding the tax. And oh, by the way, it seemed that my friend didn’t want me to get the same postcard as the one that she picked. I didn’t quite get why it was such a big deal. I mean, if I didn’t like the one she picked, of course I wouldn’t pick it myself, right? But I guess people are different. I actually wanted to pick the same postcard because I loved it but I decided to pick a different one because I didn’t want to annoy her. I don’t like problems, so, well, I guess it shouldn’t matter. The one that I picked was not that bad, either, so, well, gosh, I’m so good at entertaining myself. LoL But, ugh, I haven’t received the one from Kansas City, MO, though. I wonder if I put it into a wrong box in the post office. I mean, we were in a hurry. My friend was waiting in the car. So when I found one, I just put it there. It was said to be Santa Claus box, though. So maybe they weren’t going to deliver it. Let’s see. Sigh.

And by the way, Kansas City is in Missouri State, so went all the way to Lansing to get a postcard from Kansas state. Yeah, we were crazy like that. LoL But there was even a USPS box there, so it was kinda cool because then I could directly write, stamp, and send it right then and right there. Then we couldn’t get one from Iowa, because when we got there it was already dark (remember the incident?) and we didn’t stop by either, so we skipped it. South Dakota postcard wasn’t hard to find either. Maybe it’s because it’s so famous with Mt. Rushmore stuff. We even got the postcard before we reached Mt. Rushmore, which was a good thing because when we got there, we didn’t really see any postcards for sale. 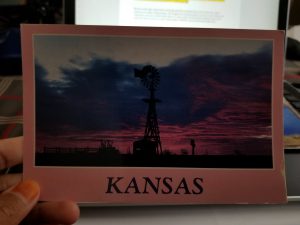 Then, Colorado. Well, we couldn’t really get a postcard there, not that I really planned to get one, though, since I had got some Colorado postcards before. But, well, we couldn’t get one in Nebraska either. We went to several gas stations we run into a long the way but the postcard was simply not there. Sigh. And since we decided to skip Santa Fe and drive all the way through the night back to Tucson, we didn’t get to find a postcard from New Mexico either. So that’s the story about our pursuit of postcards. I guessed it wasn’t really a thing anymore especially because now we have phones, right? People can just snap a picture and send it to their friends online. They can even video-call, so yeah, postcards might be considered a little bit old-fashioned. But maybe that’s why I love sending postcards (to myself) because I am kinda old-fashioned myself (in addition to the fact that nobody would send me one, so, well….). Anyway, I am glad that people still sell it. I actually hope that this post-crossing becomes a thing in my country. I mean, we have so many beautiful and iconic places. If people love sending postcards, that could be good for the economy, too, no? Ah, I might be thinking too far with the little economic knowledge I have. Haha ごめんなさい😊