Skip to Content
Home Blogs Self-motivation Love: Would you confess first?
by

The other day I ran into this tweet by Paulo Coelho: 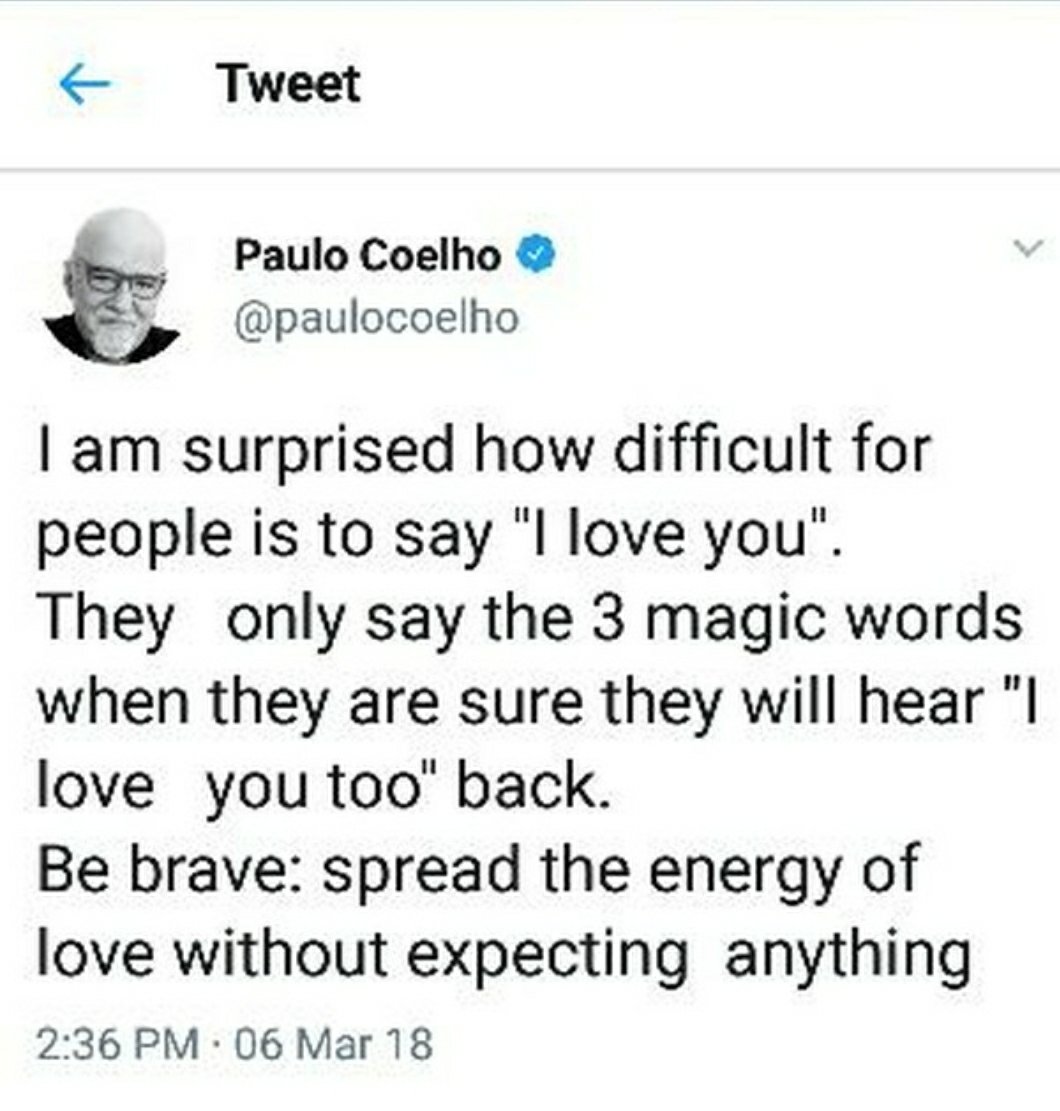 It really strikes me. I mean, that’s how I often feel, too. Not only “I love you” but something like, “I miss you”, “Where have you been? I’m worried.”, etc. Sometimes I’m afraid some people will think it’s cringey especially when we are not that close. So I often keep those words to myself.

The other day I also happened to make an Instagram poll asking, “Have you ever felt that you’re missing someone but were not brave enough to tell them so?” And most of them (88%, 21people) answered “Yes, often”. And only 12% (3people) chose “No, I’d always tell them.” Some of those saying “Yes” shared with me why. They said that they were worried that the person didn’t miss them too, for which they would be embarrassed for telling them “I miss you.” Someone said that maybe the person (her husband) is too tired so she just hugs/holds him without saying “I miss you”. Someone else says that she will say so only if she is sure that the person must be missing him/her too, that there’s nothing to lose by saying it. 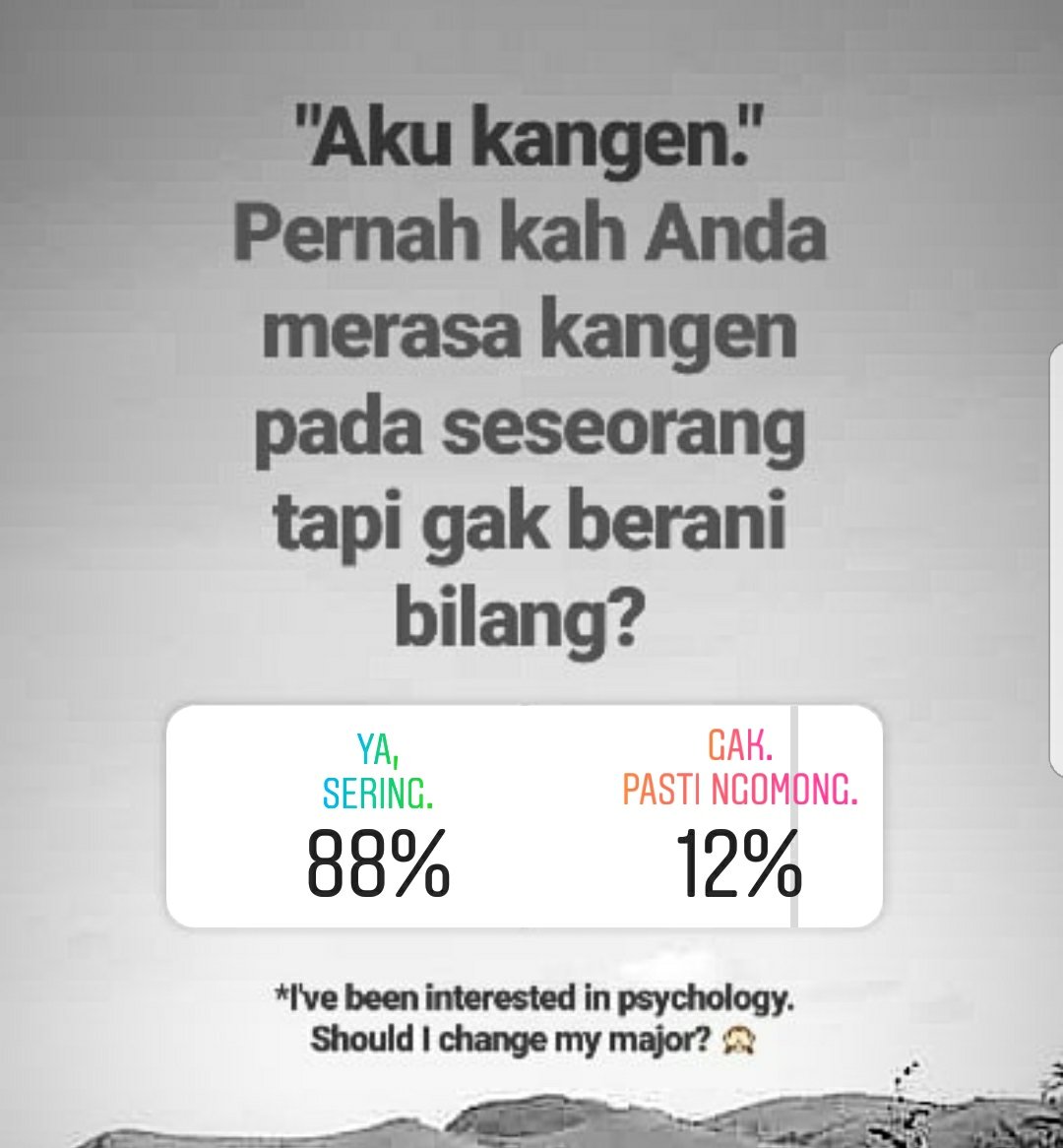 Translation: “I miss you.” Have you ever missed someone but were not brave enough to tell him/her so? “Yes, often.” “No, I’d always tell him/her.”

Then, I made this poll on Instagram. I asked if people would tell their crush if somebody has assured them that s/he feels the same way about them. 57% (13participants) chose “Yes”, 43%(10participants) chose “No”. One of those who chose “No” says that having somebody assured her about her crush’s feelings is different from having him himself tell her that he loves her. Well, this isn’t the case in my poll, because it means she won’t confess first, right?

Then I made another poll using the old template. I changed the question and asked, “Then: Would you tell him or her if you have no idea about how s/he feels?” 53% (8people) chose “Yes” and 47% (7people) chose “No”. Some people participated and answered both questions. Some people only answered the first question, and some people answered only the second question. 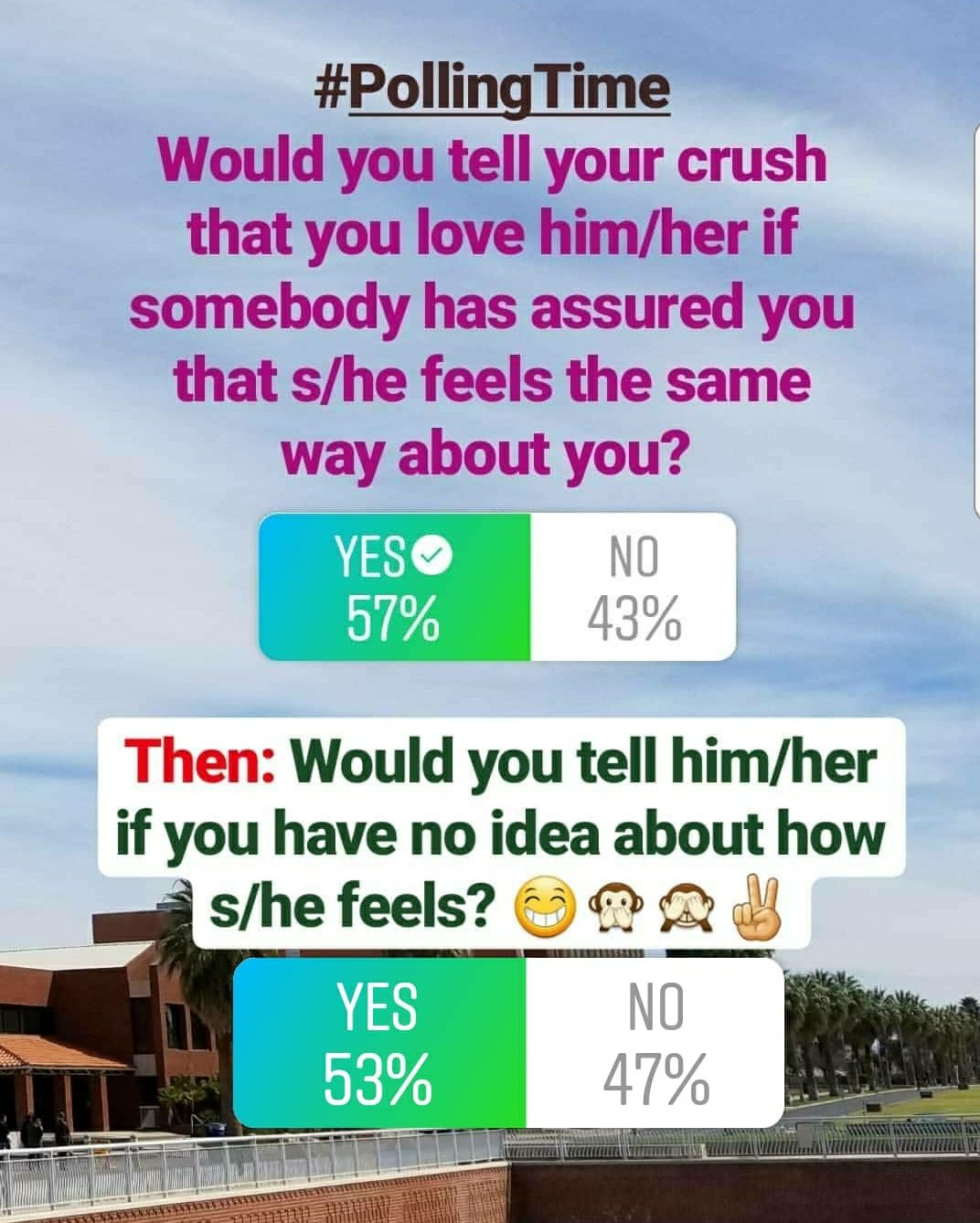 Interestingly, however, from those who participated in both polls, I can find at least 4 types of people.

1. Those who say “Yes” to both questions. These are the types who will confess first, regardless of whether or not they know how their crush feels about them. I really love this type. I really wish I could be that brave.

2. Those who say “Yes” only to the first question and say “No” to the second question. These are the types who will confess first only if they are sure that their crush feels the same way about them. I understand. One of my respondents actually shared that it happened to her. Her friends assured her that her crush liked her too. So she confessed. She was rejected 🙈🙈🙈😐😐😐

3. Those who say “No” to the first question and say “Yes” to the second question. These are the types who will confess first only if they have no idea about their crush’s feelings. I find this type interesting. I really wish I could ask them why but I’m afraid it would be too personal. This is just a “poll” anyway. But I can’t help wondering, so I can only guess. Maybe because if they know their crush loves them then they can always wait for their crush to confess first if it’s true? Or they’re afraid that their crush will run away if they confess first? I don’t know, but this type is intriguing.

4. Those who say “No” to both questions. These are the types who will never confess first even though they are sure that their crush also likes them 😐 No offense, but I really find this type overwhelming. Like, why? Why don’t you tell him/her? Is it because of gender? I mean, maybe you are a girl, and you feel that it’s inappropriate for a girl to confess first? Well, I know, it’s kinda old-fashioned, and now it doesn’t matter anymore who confesses first, whether a boy or a girl. But I think I understand that for some people it’s still not as easy. And maybe it’s about principle? That you want your crush to make the first confession? I don’t know, but I’m curious.

(And then there is the 5th type: those who didn’t vote for both questions. Haha I seriously wonder why they didn’t just participate 🙈😅 But, well, it’s just an Instagram poll anyway. For some it’s just for fun and insignificant 🙈😊)

And me? Well, I’m not sure which type I am 🙈 I think I belong to the type who asks such questions 😌🤗✌️✌️✌️ I’m kidding, maybe I belong to Type 4 but wish to be Type 1. I think I’m just not brave enough. I can never be sure of others’ feelings unless they themselves convince me. And I am often not sure about my own feelings. That’s why. It’s like: “Do I really like this person? Don’t I just admire him?” Or “Do I really love this guy? Is it really not because he’s good-looking? Is it really not because he’s popular?” Etc. Well, I know there’s nothing wrong loving someone only for those reasons, but I just don’t think it’s right. People need and deserve to be loved for the way they are. People are not only their looks and beyond their popularity. See? I’m making it complicated 🙈😅✌️

But, anyway, let’s not talk about me. I just want to share my two-cents trying to understand Type 2 and Type 4. Well, I think the root lies in “the fear for not being acknowledged”. That the feeling, be it love, longing, sadness, etc., is not significant. There are cases when you are brave and confident enough to say “I miss you” or “I love you” to your spouse or kid, best friend, etc. even though you know they will give you crazy response, something like, “What now? It is fishy. Do you want something from me?” 😂🙊🙈😅✌✌✌ But you still do it anyway, because you won’t be embarrassed, and you believe that somehow they care for you and appreciate your feelings. When this kind of belief is absent, fear replaces it. That is why some people do not have the courage to share how they truly feel, whether they are sad, stressed, depressed,, etc. They are worried and afraid that their feelings would be ignored, neglected, or disregarded: thought to be insignificant. So they choose to shut up because they know the feelings are significant to them. But, well, I could be wrong.

Nonetheless, there is this thing said by a wonderful girl of Type 1. I really admire her for having such confidence and courage. She says (roughly translated), “What is the worst that could happen? I can’t keep my feelings to myself. I will always tell my crush regardless of whether or not (I know) he likes me. It’s more relieving that way so I know how he feels about me instead of painfully wondering about how he feels. If he rejects me, then I hope we can still be good friends. If he avoids me for that, then it can help me to move on.” ❤️

What do you think? 🙈