So, well, we finally made it to our destination, Mt. Rushmore, and continued the road trip and finally made it home safe. It was crazy, though. We were supposed to stay a night at Santa Fe, NM before returning to Tucson, AZ. But I guess we’ve been too tired so we just headed straight to Tucson from Fort Collins, CO. It’s alright, though. It was just a $15 stay at Santa Fe, so we just skipped it because we wanted to get home earlier. And we also took turns driving so it wasn’t that exhausting.

We arrived in Tucson maybe around 2am the next day. Then we had two days left to use the rented car before returning it because we rented it for a week.  Then we just drove around Tucson, shopping and such. My friend had said that I could drive in Tucson, but on the first day, I didn’t get the chance to drive at all. Fortunately she offered me to drive on the second day (the last day we could use the car before returning it), so I took the very chance to practice and enhance my driving 😀 (Btw, don’t get me wrong, I don’t try to blame my friend for not letting me drive. It’s my own fault for not insisting that I want to drive because I was scared and not confident. Hhe Though sometimes I kinda wished that she would insist that I should drive. Haha Sometimes I need to be pushed like that. So troublesome, aren’t I? Sigh).

But well, I did some driving before finally letting her drive again. We were originally plan to go to Mt. Lemmon. We tagged along the new student too. I mean, as an Indonesian myself, back then I always wanted to see snow. And it was snowing in Mt. Lemmon so I was thinking that maybe we could take him there to experience some snow since it doesn’t really snow in Tucson. I wonder if I was doing too much or if it wasn’t necessary, though. Sometimes I try to do things the way I want people to do to and for me. But maybe not everyone wants to be treated that way, so I don’t know. But, well, when we were about to drive up Mt. Lemmon, there was this sign saying that the road was closed and there were some sheriff, too. I was anxious because at that time I was the one driving. I was scared that we’d get into trouble since my friend was the one who rented the car. I didn’t have my passport with me either. Not that they would ask for my passport, but at times like that I was really paranoids. But fortunately, the sheriff just told us to go back because the car wasn’t proper to drive in such situations. It was unfortunate, however, that we weren’t allowed to drive up because it was snowing up there and the road was icy and thus dangerous for us considering we only had an ordinary car. So we went to Sabino Canyon instead, spent little time, and took some pictures there. I don’t know, maybe because afterwards I wouldn’t be able to take him to such places, so while I had the chance, at least I have tried to give him the “abroad experience” in town. I mean, if somebody did that for me, I knew I would be happy, so maybe that’s why I tried to do the same to others. Hhe 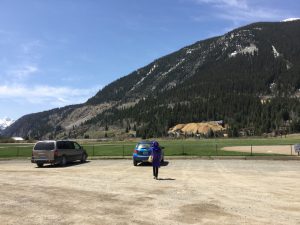 Anyway, we then went back home. I let my friend drive again. やっぱり(it doesn’t feel the same when I say this in English, but more or less it means “I thought so”, “as expected”, “apparently”, etc.). やっぱり I was tired. Tired of feeling stupid. (I feel stupid when driving, remember?) Besides, my friend told me that there was this girl calling me “bitch” when I was driving. I didn’t know that until my friend told me. I guess I was really focused on my driving that I didn’t care about others. (And maybe that’s how I live my life as well; i.e. I mind my own business). But it seems that the girl was someone driving a car that I overtook. Well, at that time there was this bus stopping in front of me, so I changed into the left lane. I turned on the turning signal, I did give the turning signals, I made sure that the distance was enough for me to make a safe turn or to change the lane, and I was driving according to the speed limit too, so you see, I was trying my best to be careful. Apparently, I was not experienced enough about this, i.e. the girl might have thought I was just being a jerk changing the lane like that. Maybe it was too close and dangerous for her, even though I thought it was safe. My friend said her calling me a bitch was so rude, but I couldn’t help blaming myself. I keep on thinking that I could’ve done better, i.e. I should’ve done better.

This is so frustrating for me. I mean, I really want to be able to drive. I still want to get a driving license. But I really don’t want to put people in danger. I need to improve my driving skills, but for that I’ll need to practice in the real roads with the real traffic, but when I do that, I’m putting people in danger. It’s so exasperating. I really feel like maybe it’s better for me not to drive. I really wish I could have the confidence like I do with riding a motorcycle. I mean, when I am riding a motorcycle, I am sure I won’t harm people, even though some people actually think that I am a bit careless or ride too fast, but I trust my riding skills, I know what to do in case things go wrong, and such. With driving, however, I can’t even trust myself. So yeah, it’s maddening. But, well, that’s the story about my winter road trip for now. I’ll write the about the pursuit of postcards in another post 😊