Skip to Content
Home Blogs Self-motivation Are you rich? How rich is rich?
by

The other day one of my friends shared his financial management on Facebook and talked about how we, graduate students, especially ones with scholarship or assistantship, are considered “poor”. He posed a question about being rich: “How rich is rich?” This reminded me of my own conversation with other friends here.

I remember the question I asked was, “How do you define rich in the US?”

I honestly can’t tell if people think I’m rich or poor, but I know I’ve never felt really poor. I get what I need, and that’s exactly what I need. Well, I admit that prices in US are crazy. The price for one-month rent here might be equal to the amount I’d spend to rent a place for an entire year in my country. Then the food price, the transportation, the clothes, etc. I’m not sure if I don’t feel poor because my tuition is paid by my scholarship and, let’s just say that, I get “paid” for studying. But I think sometimes being rich and poor is just a matter of perspectives. Like, how do we define rich? How rich is rich?

Well, many people in my village think that if you have a car, then you are rich. I thought so too, but now I don’t think that’s true either. I mean, some people have cars but they can’t even afford to build their own garage or pay for a parking garage or pay for the tolls. Are they considered rich? It sure is fancier to have a car, but do I really need it?

When I told my friend that I felt rich, they were kinda surprised. I didn’t even have a car; they said. But, well, while I admit it would be more convenient if I have a car, like I can go anywhere anytime, but it’s not that crucial. I can still manage with the public transportation. I guess it really depends. And honestly, while I’m sure I can get a car if I save enough here (cars in the US are not as expensive as those in my country anyway), I feel like I’ll spend more if I have one, for the insurance and stuff, and I know it’s something that I won’t use every day, so it will feel like a waste, won’t it?

But, well, maybe one of the reasons I feel rich is because I can get more than my basic need here. I get to eat properly. I can save to travel. I can buy good shoes. Etc. I can do things that I cannot do no matter how hard I work and no matter how much I try to save in my country, Indonesia. Well, yes, I don’t get to eat without efforts; i.e. I have to spend more time cooking so I don’t have to eat out (eating out can insanely be pricey especially if it’s not junk food). I don’t get to eat out often because for me it’s just too expensive. I don’t get to go to the cinema whenever they release a new movie. I don’t get to go to a café, a bar, etc. either. But even if I apply this very lifestyle in my country, I know I won’t be able to buy the shoes I have now, I won’t be able to travel to places I have been to. But, well, yeah, I admit it’s not that hard for me because I’m not a party girl anyway and I’m more of an introvert, so I like staying at home. I know that for some people, it can be hard. My friend said (I’m paraphrasing and semi-translating it), “Some people have lifestyle that makes their definition of “poor” & “rich” really skewed. They do and spend money on things that actually are not necessities but because they aren’t aware of it, it looks as if “they can’t live without it”.” I guess he’s right. 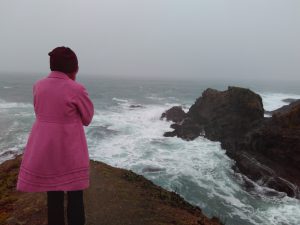 But, well, maybe another reason I feel rich is because I have been much poorer before. Back when I was a kid, I used to eat only rice and sambal (salt, tomato, and fish paste ground together), and sometimes with some chips if I was lucky. Sometimes I got to eat egg and meat, too, for sure. It was such a luxury. But just for a comparison, back then if I was to fry one egg, I had to cook it with flour so that it became “bigger” and we could cut it so that we could eat it with rice for several times (for breakfast, lunch, and dinner, for instance). And if we were to cook instant noodle, then we would eat it with rice so we could get full and we could save some of the remaining delicious instant noodle for the next meals. Now? Now I can just eat one egg and sometimes more for one-time eating. I can eat one instant noodle with egg and even shrimp sometimes and I don’t have to eat it with rice or save it to eat later.

Sure there are many more delicious and fancier meals out there, which I can’t get to buy either because I don’t like it or because I simply can’t afford it since I want to save money. But the way I see it, I have enough. Maybe more than enough. I’m healthy. I’ve got lots of kind friends. I get to eat healthily. I get to travel once in a while. I get to go to the cinema once in a while too. And occasionally I get to eat out too. This is such a luxury for me.

Well, yeah, I don’t have all the expensive-brand stuff, but I don’t really need them either, so I’m fine. Seeing it this way, don’t you think I’m rich? Well, maybe I’m not rich since I still have to refrain myself from getting what I want, but, well, I know I’m not poor. I owe nobody money either, so, well…

And, while I believe having a lot of money is good, I cannot really say it’s the measure of being rich. Ariana Grande says in her song, “Whoever said money can’t solve your problems must not have had enough money to solve ’em.” Well, in some cases I know it’s true, but well, she must have never wanted something that cannot be bought with money… (PS: I don’t hate Ari, so please don’t spin my sentences. Thanks.)

But, oh, seriously, how do we define being rich actually? I might not have a lot of money, but I have never really thought that I am poor. When I refer to myself as being poor, that’s when I use people’s definition being projected onto me… What about you?