Ok, first of all, I’m not going to talk about the plot or how the story began, went on, and ended. I guess you can find it somewhere else. There has been plenty. All I can say is that this movie is absolutely amazing. I really really really love it. The rest, I just want to talk about how I feel about this movie. But first of all, maybe it’s best to know that this is a live-action movie adapted from Manga (the title literally means “The girl who loved lies”). Yup, Japanese is really cool with such stuff. They are the experts. And by the way, I just found out that there is the Korean drama version of this movie: The liar and his lover. Ok, right now I am feeling inferior because everybody talks about K-pop and stuff, so I’m not going to talk much about their version because I’m afraid I’m going to be upset because I’ll end up saying bad things about it. But on a side note, I read some reviews that say that the K-drama version can’t compare to the J-movie version. Well, I know it’s biased because I get that from the sites of people who love J-things, but I’ll leave you at that. This is just “fyi” 😌🤗✌️ 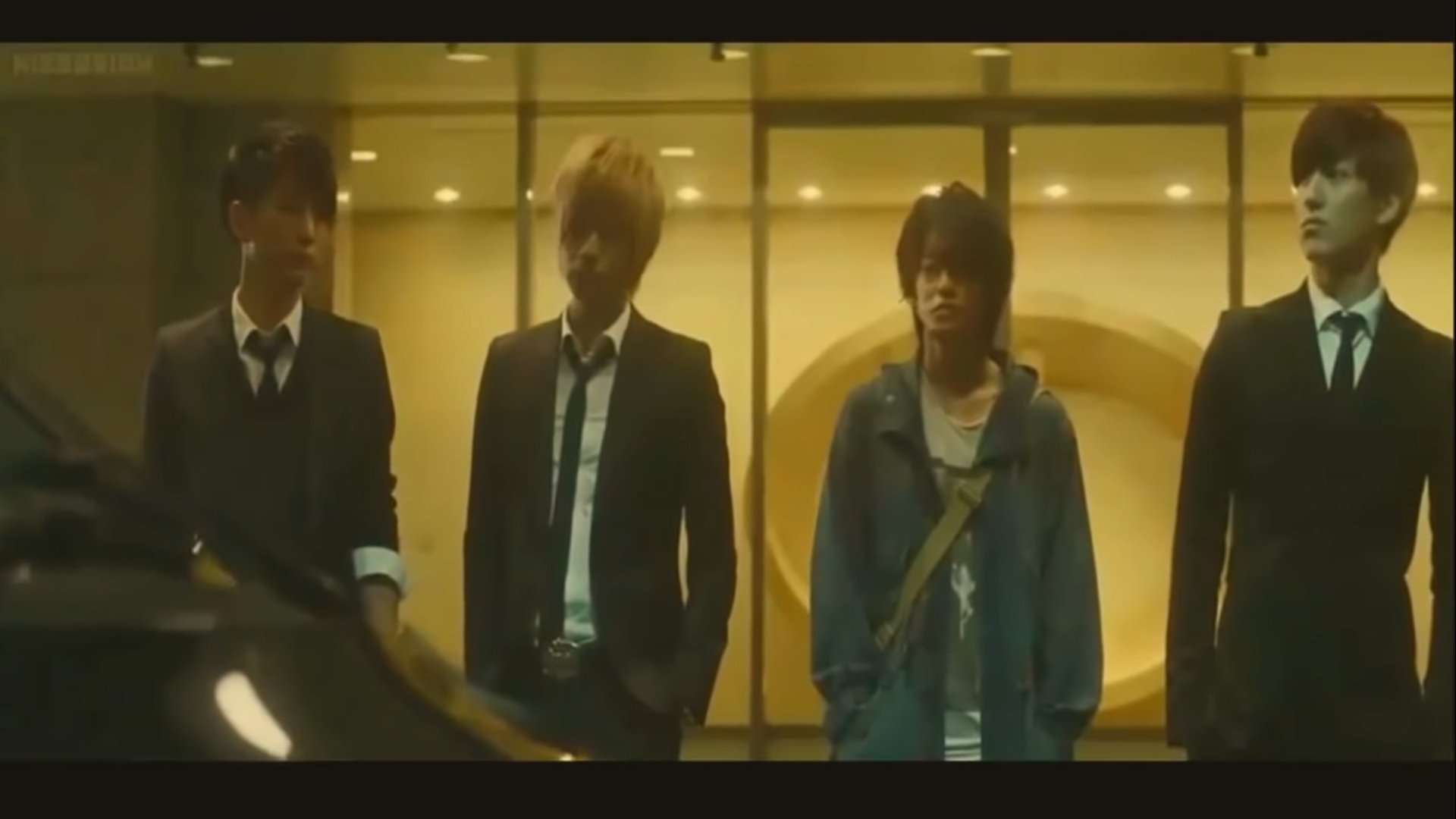 Well, second of all, it’s Takeru Sato (or Sato Takeru, I’ve never been sure of Japanese people’s first and last name!). So yeah, he stars in this movie. And I don’t know why. It seems like many if not most of his movies that I watch have something to do with music: Beck, Bloody Monday, Mr. Brain, and now this! Ok, only 4 then. But they are many for me. And he’s not even a singer or a musician. I browsed and I found that he’s never been in any band or the likes, so it’s kinda awesome.

Takeru Sato is not a love-at-first-sight type guy for me. I’ve seen some of his movies but I couldn’t bring myself to be swooned over by him. Well, maybe I tried to not be his fan. Maybe because of his starring as Rorouni Kenshin and because everyone loves him for that already so I think he doesn’t need my love. I want to be that someone who gives love to those who’re in need 😁🙈😅✌️ But, well, eventually his charm got into me. I really love him. His acting skill is really great, so amazing beyond compare. And he’s charming. I love him 😊

Then, this movie, wow, it’s so great. I read that they purposefully auditioned the cast in order to get actors and actresses that could actually sing. They have to submit a demo in order to select the cast! Wow. Wow. Wow. I mean, this is what I love about J-movies/dramas. I feel like they really make something because they want to create something good, not just for the sake of profit, fame, or the likes. In this movie, the girl (Sakuraku Ohara, playing as Koeda Riko, the main female character) was a newcomer. She was selected for her voice. So she’s really the one singing the ost for this movie: Ashita Mo, Chippoke Na Ai No Uta, Sotsugyo, Utau tai no Uta, etc. I firstly thought that maybe she was just acting or lyp-syncing while I tried hard to find the real singer. But then, nope. She’s the one. She’s the singer as well as the actress. Very very cool. 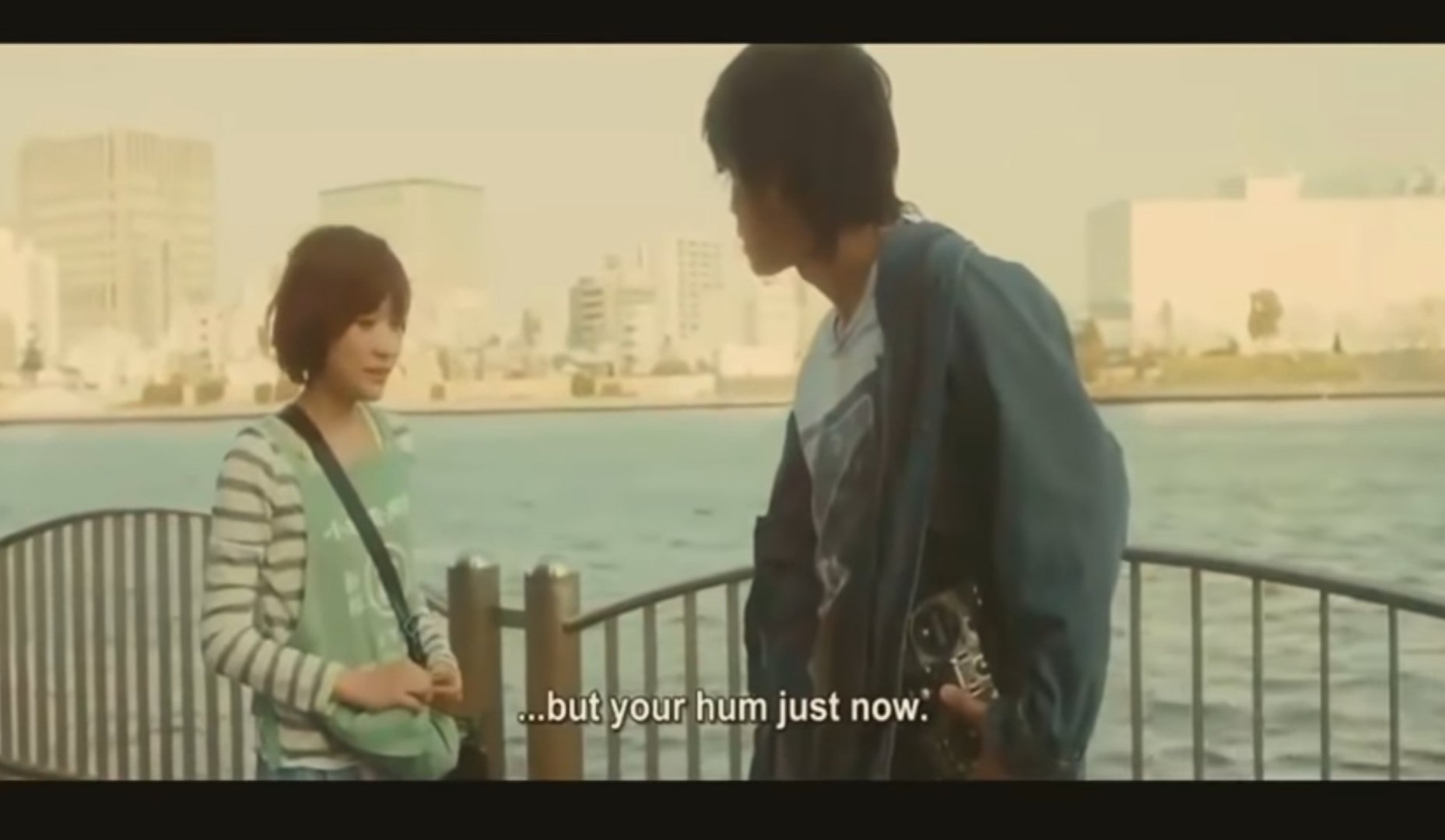 And it goes the same with the songs brought by Crude Play, the (fictional) band in the movie. I mean, there is no Crude Play in Japan. They existed only in the Manga, and so now only in the movie. They exist only in the fictional story. But they really managed and created everything as if the band did exist. I mean, the actors playing the members of the band are really selected in such a way that they’ve got to sing all the songs themselves: Insecticide, sotsugyo, sayonara no junbi wa modekiteita, etc. I kept searching in Google, trying to find out the real singers because it’s simply amazing. I mean, I don’t always love the soundtrack of a movie or a drama, but when I do, I know they are exceptionally good! And I keep Googling, “Who is the real singer in Kanojo wa iso wo aishisugiteru?” or “Who sings the songs in The Liar and His Lover?” But, nope, no answers. Instead, I found that they (Crude Play) said they’d aim to perform live during movie promotion and stuff. So they are real. The Crude Play in the movie really sings all the soundtrack! Gosh, it sounds really good, like a pro, nothing like an amateur. Even as I’m typing this, I still find it hard that it’s true. It’s just so good. I’m really in love with them 😭❤️😍 Especially, the singer/vocalist, whom I will talk about soon 🙈😍✌️

Well, so the second-lead character that I fall in love with is Miura Shohei playing as Shun Sakaguchi, the vocalist of Crude Play. Wait, seriously, before I continue about why I love Shun, I just browsed Miura Shohei’s profile because I forgot Shun’s complete name. And I am rendered speechless. I’ve never been his fan before. I love Mizushima Hiro, Kamenashi Kazuya, Takeru Sato, Ikuta Toma, etc., but seriously, I have never thought of Shohei Miura. But, now, I mean, look at his birthday! It’s exactly the same as mine! EXACTLY THE SAME! DATE, MONTH, YEAR!!! What sign is this? Is this what they call destiny? 😱😮😲😳 I mean, this can’t be a coincidence, right? They say things happen for a reason. Could it be that he’s the one for me? 🙈😱😮😳 I mean, I love him, I love his singing in this movie, and I’ve never paid attention to him in other/previous movies, so maybe, maybe, maybe, who knows that he’s someone that got away? 🙈😱😲😳 I know I’m being silly. One can’t possibly fall in love with or love each other just because they share the same birthday, right? 😔😭 But since he shares the same birthday as mine, so no, officially he has got a special spot in my heart!!! Oh my God, I can’t get over this yet to continue to write about the character he played in this movie 😭😭😭

But, ok, I will try. First of all, I still can’t believe that he really sings all songs in that movie! I mean, the songs that are of the movie’s Crude Play! It doesn’t seem like he just sings for the sake of playing in the movie. He sounds like a real pro!!! Not that I know how a pro is like, but I can tell that he’s good, no, good doesn’t do him justice; he is amazing! 😍😭❤️

But, well, the reason I love him as Shun? Well, in this movie, the story goes that Aki (Takeru Sato) is the genius one, that he’s the real pro at composing music, while Sun (Miura Shohei) is just ‘acting out’. He is not a real pro, he’s not a genius musician, he’s actually bad at playing music, he’s just selling the “image” of the good Crude Play (the band) when in reality other players play the instruments for them. He’s even “mocked” by the music producer, like being blatantly told that he’s actually not good. But despite all of that, he remains to be a good person; he remains to be a good friend. Well, (I’m crying as I’m typing this, just so you know 😔), it hurts when people keep comparing us to our best friends, especially when we are in the lower position or considered inferior. At this point, it’s easy to turn bad and betray the best friend even though it’s not the friend’s fault. At this point, it’s easy to then hate the friend to whom you are compared. Such pain is sometimes unbearable. Sometimes you want to really prove to yourself and people that actually you can also do what your best friend can, but somehow you realize that you can’t, but you’re tired of being compared to him/her, and so it can become more painful. And, thus, only people with purely good heart will remain good. And Miura Shohei’s Shun is that person. He keeps siding with Aki and remains his best friend till the end. That’s the kind of friend I’d love to have and treasure in my life. Because I know how annoying I can be and so I need such a person who will not blame me for things that I’m unable to control, for things that I wish to change but are hard to do. (Ok, I’m seriously weeping now 😔😭). But yeah, that’s why I love Shun in this movie 😊❤️

So yeah, that’s the review for now. I know it’s kinda biased to talk good things about Japan and Japanese because you know how much I love Japan and Japanese. But I try my best to be as objective as possible. I am just trying to be honest with my feelings 🙈😊 And, I know I can actually share the links to the songs and the movies here. But maybe it’s not the right thing to do. I mean, if you really want to see the movie or listen to the songs, you’ll always find a way ^^ The internet makes all things possible, iykwim 🙈✌️✌️✌️

PS: This movie is Takeru Sato’s first romance. He is so cool and charming even when it’s not a romance, though 😊