He then asked about the proof that I was active as a student, like the lady previously did. He asked if the university paid me. I was like, “No, it’s full scholarship. I don’t work. My Indonesian government pays everything for me. I also get the monthly stipend, the document of which I attach along with my bank statements.” He didn’t get it, so I tried to show my student ID card but he refused; he wanted something like POE (proof of enrollment) or a transcript. I said I could print them if he let me out and went to the other office again but then he just asked me to show it to him. I logged in to my Arizona Mobile app on my phone to show him my grades in Spring 2018 and my classes in the next Fall 2018. (Seriously, what was he thinking? Of course I was enrolled! Of course I was active!) AND GOSH, THEY COULD HAVE SAID SO ON THEIR WEBSITE OR WHEN I MADE THE ONLINE APPLICATION JUST LIKE THE UK EMBASSY DID SO I COULD PROVIDE IT FOR THEM! THEY DIDN’T. DID THEY ASSUME I WOULD PREPARE EVERYTHING EVEN THOUGH THEY DIDN’T SAY I NEED IT? DID THEY THINK I COULD READ THEIR MIND? Ok, sorry for the capslock, I know that somehow I should have provided them just in case, but I really wanted to blame the embassy. I felt really bad for not anticipating it correctly. I didn’t want to blame myself even more. I was feeling so low. 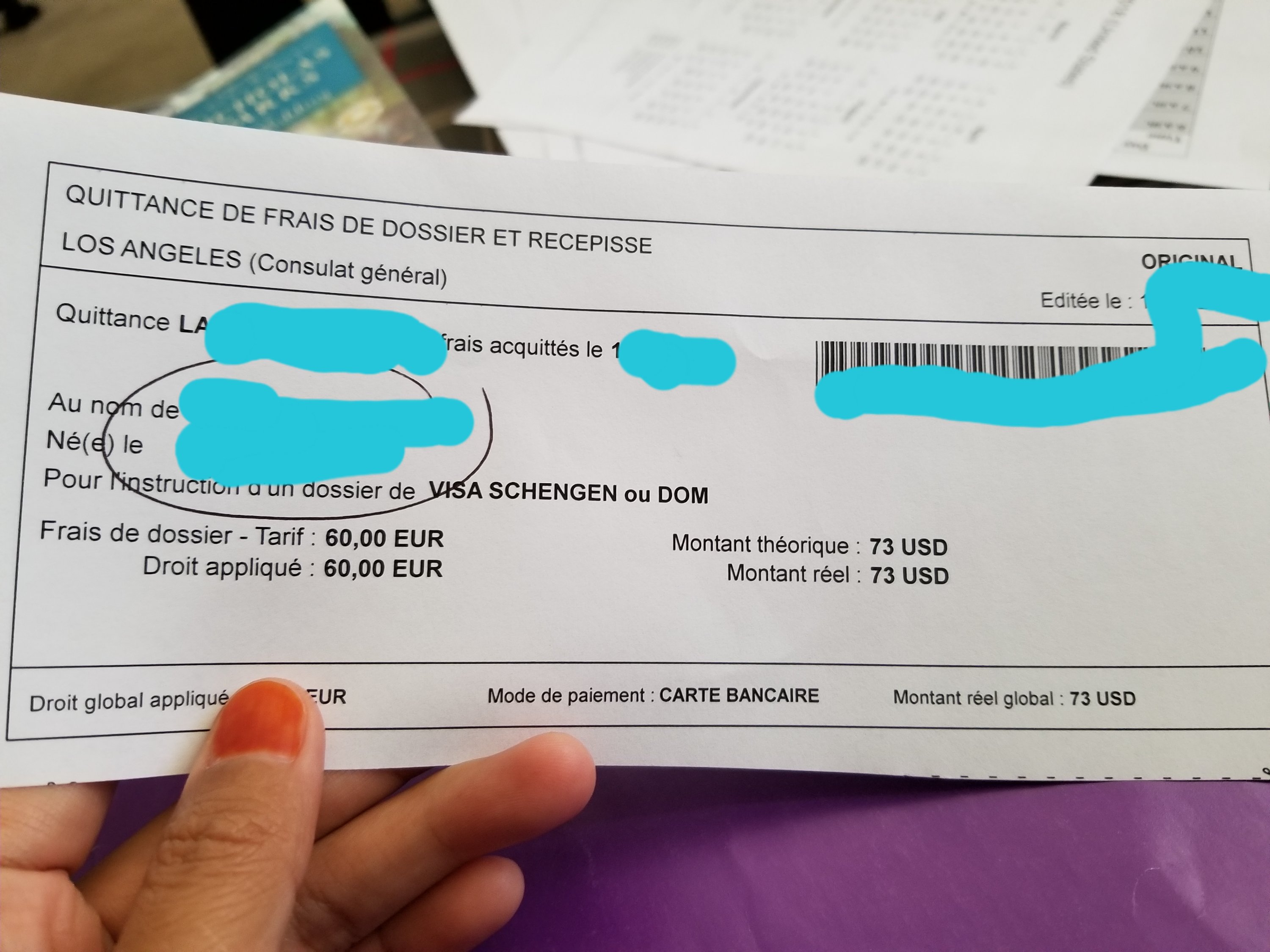 Then he took my card for the payment. It was €60 but it charged me $73. I kept asking him if he was sure that I didn’t need to reprint the modified confirmation receipt for the hotel whose reservation I messed up earlier, and again, he smiled, saying it was fine. It’s killing me T_T He’s definitely the kind of guy I cannot handle. He’s so handsome, gorgeous, professional, and nice but seemed emotionless or expressionless (the smile didn’t get through me because I was already in panic so for me it was all superficial and if I really had to say it, I felt like he was actually teasing me for every blunder I made!) T_T He even took my USPS return envelope. I had seriously thought that maybe they wouldn’t accept it because I saw FEDEX instruction in the office. But he said USPS was okay. He even fixed the label on the envelope for me. I said that I would need the passport to travel to Philippines for a conference at the end of May, so I wanted to make sure that I received the passport (and visa hopefully) by at least May 27. He said I would get it before that. I asked him again if it was okay not to reprint the modified reservation. I told him I was worried that it might cause my visa application to be denied or rejected. I was actually anxious because I also didn’t want him to think that I was annoying by asking the same question again and again, but he just smiled and said, “No, you’re fine.” I really wanted to cry! Too bad it wasn’t a movie or a drama, because if it was, I swear he would fall for me. You know the cliché? A gorgeous guy ran into a clumsy, unattractive, and unfortunate girl when he was working; he symphatized with her, then a series of dramatic coincidental events made them meet again and again, and somehow they fell in love with each other, went through the hardship together, got married, and lived happily ever after. It was fate and destiny. Damn, I might have this Cinderella complex. But of course, none of it happened, because apparently, I was the only one falling, not in love, but into a dark pit engulfing this visa thing, and alone. *Sigh

I left feeling so broken and devastated, and oh, before I forgot, I didn’t get the change but I came back to the lady in the other office to hand her my $20 and asked her to keep it because she had helped me. I don’t like feeling that I owe somebody anyway. I was feeling really thankful, honestly grateful that somehow I was still able to print the documents there. I thought that, even if the worst were to happen; i.e. I would not get the visa, I should not ignore the fact that all the officers were nice, the printing lady, the lady and the guy(s) in the visa section, and even the security guard. That they did not merely accept my application documents as it was was because they were just doing their job. I understood this very well. I wouldn’t blame them if my visa application was rejected. I was just resenting the fact that it was so difficult for an Indonesian passport holder like me to travel around the world. I almost always need a visa. And it’s not always easy to get one. (So I kinda understand if some people are upset with the fact that some foreigners come to my country without visa – and with not enough money). Well, this was actually one of those times I resented my being Indonesian. I was really broken and sad. I couldn’t help crying. Again, if it had been a drama, a nice handsome and rich guy would notice me and probably hand me a handkerchief to wipe my tears or offer me a shoulder to cry on. Damn me, what am I writing here?!

Ok, well, I was feeling so down and low that I almost missed my stop after I took the bus from the embassy. Fortunately, the bus was stopping because there were some passengers waiting for the bus at that stop. Well, of course due to what happened, the booking, the printing, etc., I now had no time to either go to the beach or Walk of Fame, so I decided to head straight to KJRI LA, my Indonesian embassy. I transferred to another bus to get there. When I arrived, it was locked, but then somebody let it open for me. He explained that the iftar was still long, but then I said that I had sent them an email and asked if I could just stay there before I headed to the station for my bus. He said of course it was okay. I was really happy. (I was on the verge of crying at that time and even now that I am writing this. Well, I did cry. I am crying). They let me in, they let me stay, no questioning, no screening. They didn’t even ask who I was or what I did. They welcomed me with a smile and true humility and hospitality. After all of that resentment of being an Indonesian passport holder I felt since leaving the French embassy all the way in the bus while heading to the Indonesian embassy, after all of that, this was the only place I could call home. It was the only place where I was welcome. It was the only place I felt safe, trusted, and respected. So no matter how difficult it is being an Indonesian passport holder at times, I would still love being an Indonesian. It was my country, that’s where I belonged…

In KJRI LA, I stayed until late at night, because my bus to Tucson was scheduled at 11.55pm. More people were coming, and they were really friendly. An Indonesian lady even said that I could take some meal with me so that I could eat it for sahur in the bus. My God, I found kindness everywhere I wasn’t sure if I deserved all of that. I knew I felt so low, down, and helpless after what happened with my Schengen visa application, but throughout the way I always met nice and kind people. Why should I be sad? Because feelings were there even when you didn’t want them. As simple as that.

I left the embassy after tarawih prayers around 10.30ish p.m. to catch the bus to the station. Thankfully, I wasn’t late. I arrived in Tucson as scheduled, around 10am the next day, Thursday. I was still stressing about my Schengen visa application and the fee and taxes I should pay when I cancel the reservation. But I was like, “F*ck it, I don’t care anymore.” I wanted to get over it as soon as possible. The next day, I cancelled everything except the ones in France, because I thought if they were really going to check it, then they would only check the hotel reservation I made in France. I thought it was also safer to cancel it within the 24 hours. I made the reservations around 3p.m. and I cancelled it around 1p.m. Apparently, I forgot that of course it had been past 24 hours. I made the reservations on Wednesday and it was already Friday when I canceled it. LoL, me. But it didn’t matter, though. It’s still counted as “free” before July so I was still safe. I was still dreading so as I was cancelling the reservations, I also checked my bank account. I was relieved that they didn’t charge me anything (yet). I mean, I was still fearing that the charge would appear later. We never know. But anyway, at this point, I was feeling so hopeless that I thought if I didn’t get the visa, it was fine. I could still visit UK anyway. Yeah, I’d become pessimistic. But I guess I was just being realistic. I tried to accept it so I could feel fine even though I was actually disappointed. But what could I do? I could change nothing. I could do nothing. All I could do was wait and see. I didn’t even have the courage to pray that God grant me the visa. I was losing hope already.

So here I am, trying to be hopeful that I’d get the visa. But still, I don’t really expect to get it. I’ll keep you updated about how it turned out later.