Hi, I know it’s been long overdue. My Japanese class ended about three weeks ago. There were so many things I wanted to write but things were crazy around the end of the semester. You know, deadlines, papers, and those visa things I should take care of. I just couldn’t make time to write here. And, well, I’m not sure if I could write all details really well now. I guess it’s kinda different to write things especially when you are not really emotional or enthusiastic about them any more. I mean, I am still as enthusiastic of course, but my current feelings might be different that I won’t be able to jot down all details about which I was feeling so strong back then. But, anyway, I’ll try to sum it up.

It was really fun. A-sensei designed some activities so that we could “practice” Japanese cultures. First, she let us sit down on the floor and let us play a Japanese game called Karuta (if I’m not mistaken). Basically it’s a card game, kinda modified from the real Japanese card game. We were divided into two big groups. Each group was given a set of cards containing hiragana writings (each card has one hiragana letter). Then A-sensei shouted one letter and we had to find it. Each person in each group basically competed to collect as many cards as possible. When we found the said character, we should get the card and shout (I forgot what we should say, though. See? It’s been long time ago!). Then the one with the most cards won the game. I, of course, didn’t win🙈😅✌ 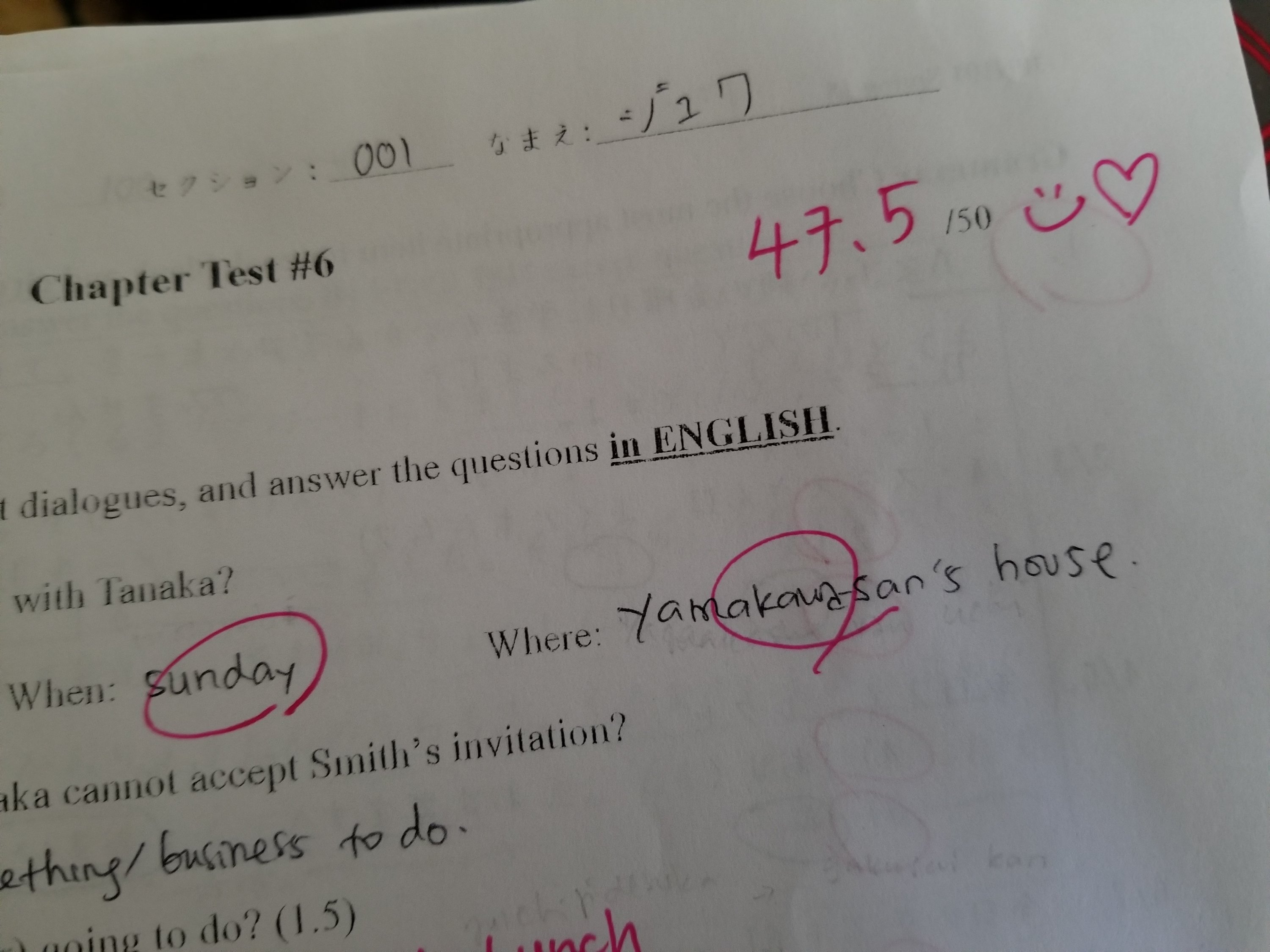 Then we were divided into smaller groups again, maybe 2-3 people. We played “face game”. It’s basically a blank face with different parts of the face like eyes, cheeks, eyebrows, mouth, and nose. First we were taught how to say them in Japanese. Then one person in the group would be the one who closed their eyes to place each part on the blank face on the floor. The other members gave her/him directions using the words we have learnt. For instance, the closing-eyes person picked an eye, then the other members told them it’s an eye and directed them, “Right, left, up, down.” until it was placed correctly. It could be intentionally misdirected or misplaced to create a funny face, though. What I loved was, I knew it could be boring, but we, the students, seemed to really take it to the heart and enjoyed the activity. (I really hope I can have students like us in the future).

Then we practiced this Japanese culture called “acchi, muite, hoi”. We used Jan-ken-pon (rock-scissor, paper). So, it’s basically played by two people, but we had to change our partner so that we could practice with different students. So here how it was. First, we played jan-ken-pon, both then said “acchi, muite, hoi” quickly and simultaneously, with the jan-ken-pon winner pointed out their finger straight on the opponent’s face and quickly pointed out the finger into a certain direction (right, left, up, down). The opponent should try not to follow the direction, otherwise they lost. It should be done really quickly. And actually later on, I realized that in some J-movies and dramas I watched, they did play this game. Hhe

The last activity was origami. Well, I guess everyone knew how to do it, though. It’s the art of folding the colorful paper to create a certain shape. I also learned this back in schools. But, well, this time we made a hat. Each of us was given a piece of paper, then we followed the instruction. It’s not that hard for me because I loved origami so it was really quick for me to finish it. Then we took pictures together with our origami hat. A-sensei said she was going to upload them in D2L, but I could not find them ☹ I took a picture with A-sensei, though. I posted it in my Instagram 😁

But anyway, about the last chapter, we didn’t do much. The teachers kept saying that it was the most difficult chapter. But because we’d been learning some part of it since the previous chapters, I guess it was okay and not that hard. We had vocabulary quizzes and kanji quizzes as usual. And, I also got another partner. My last partner was, well, so-so. I mean, he was not the most active or the smartest in term of Japanese (I’m sure he excels at his other classes!). He’s a good guy, a nice one. I don’t mean to praise myself here, but I guess I was playing the assisting role more than he was to me. I’m happy, though. It means I could be helpful to my partner, right? As I am writing this, actually, I am feeling uneasy. Suddenly I am scared that some people think that what I say about my partner is kinda rude and inappropriate. In that case, I’m sorry. I’m just trying to be objective here – academically. Aside from that, my partners are all great and nice; I love them; they are good people.