Skip to Content
Home Blogs Reviews Quotes Some Quotes, Some Life Lessons
by

This time I want to post some quotes that I’ve been gathering from books that I’ve read, doramas and movies that I’ve watched, and perhaps some lyrics of the songs I’ve listened to, etc. Well, I used to write this down in my physical diary back then. But now I don’t really keep a physical diary, so I often use notes on my phone to keep some interesting quotes when I find one. Usually, I post them as my Instagram captions (or Twitter games but then deleted them), so I guess now I can just put some of them here 🙂

Note: I try to not put quotes from One Piece here, ’cause I’ve already created special posts about it, you can find them here. So yeah, these ones are from various sources 🙂

1. “I think there are times when it’s okay for people to run away. No, I think there are times when you should run away rather than holding back.” (Neechan no Koibito, eps 6, Takada Satoshi)
Well, I love this quote because I’ve been thinking the same way. We’ve always been taught that a quitter is a loser. But nah, I think a loser is someone who doesn’t know what he’s doing and always does things for others instead of for himself. The question is not whether it is okay to quit or not. The question is what will we do after we quit? Will we be happier? Will we feel better? Is there something greater we dream to achieve and willing to risk everything for? If yes, then go ahead, quit, and build our new path. As long as we know what we’re doing, where we’re heading, and brave enough to face all the consequences that come along with that, then we’re already a winner.

2. “Snap out of it. There’s no time for regret.” (Daichi, Haikyuu! Eps 10, Season 4, second half)
My take: Too often, we spend too much time regretting the past, wishing things had been different, if only we had done things we should’ve done, if only we had not done things we shouldn’t have done, that we end up wasting too much time dwelling on the past instead of look ahead and make efforts to create a better future, despite knowing that there is nothing we can do to return to the past, repeat the time, or change it. I think, if we truly regret what happened, what we did, and what we didn’t, then we should look ahead facing the future. We should work on how to make amends and shape a better future, despite and because of what happened. That way we won’t spend too much time on something that is beyond our reach. We need to look at yesterday, yes, but not too much, and just so we can work on today to hopefully be happier tomorrow.

3. “I don’t remember when, but I was asked “You’re not a starter, so isn’t it hard to have such a genius player who is younger than you on the same team?” I’m not sure what qualifies as a “genius”, but I understood what they were trying to say. There happened to be people who think that someone like Atsumu was just born a talented player. But everything I do every day, from a scale of 1 to 10, guys like Atsumu do on a scale of 1 to 20. Or it’s a more effective 10, or a denser 10. And sometimes, instead of 1 to 10, they try things from A to Z. That’s what goes through their head. Even if they messed up sometimes, or they are hated by strangers, or cast out, even if they completely ignore something we’d consider important, they just have to do it. Even if they start coughing up blood, they are the guys who just want to keep running. There are plenty of guys in this world who we are no match for, and it’s natural to find people like that amazing. I think being able to dive headfirst into things is a talent in and of itself, and it doesn’t matter what you call them. And it’s not like genius is an insult, but if you’re thinking they’re geniuses from the start, that just means you’ve lost before you even had a match with them. And I think it’s rude.” (Kita Shinsuke, Haikyu!!)

4. “No matter how tough, or how tiring things are, it’s only a passing point. Someday, if you can laugh about your past events, then it’s all good.” (The Blind Teacher)

5. “Everyone starts out with a hole in their heart. Some people are completely fine with that hole, and others really want to fill theirs. Whether it’s with lover, or friends, or family. Sometimes it’s not with people, it can be hobbies. Cooking, music, or movies. Fishing or hiking. Or idols, or comedians. Or animals and pets. Knitting, crafts, sewing, reading, or games. Or even working out. People fill their hole with something that they love. So what’s inside that hole is what they love. True love. When they continue to stay in that hole, and don’t vacate the hole, that’s what true love is.” (#リモラブ、4, トミチカ先生)
I love this drama. It’s cute 🙂 My favorites are Gomoji and Yagihara. Should I review this drama? Well, maybe in another post^^

6. “In order to experience falling in love, a partner is needed. Love is a chance encounter, a meeting of destiny, and so expectations are raised with that one meeting. But there’s always the possibility of not being able to come across that partner. And so in instances where your love was unrequited, you may think that all was in vain. You may even consider to never fall in love or care about someone again. But without love, you’ll die as a dreadful monster. So to continue on living as a human being, you shouldn’t stop loving, even if the other person cannot love you in return.” (愛くるしい)
This is Kamiki’s drama when he was still a kid, and he’s really cute. The story is heartwarming too 🙂

7. “You may forget about the pain you inflict but it’s hard for the receiver to forget.” (Shitamachi Rocket)
I love this quote. First, it’s a reminder that we should be careful and try our best to not hurt others because when we hurt someone, maybe we think it’s okay after we apologize, but it’s not always that simple. The pain doesn’t always go away that easily. The pain isn’t gone just after an apology. So be careful. Watch what we say and do. Second, I don’t know, I just can’t help thinking about people who, I believe, have hurt me. Do they think I’d forgive if they don’t apologize? Maybe I’m not so forgiving, but, how could they continue to live in peace without feeling some guilt for not apologizing after hurting someone? I’d love to learn how…

Also, Simple Plan said in one of their songs, No Love: “…every time you fight, the scars are gonna heal but they’re never gonna go away.” So yeah, when we’re hurt, we might heal, but the scars will always be there to remind us of it. And it’s the same with people that we hurt…

8. “Not everything will go your way. And how is it possible to survive without making others worry? People make others worry, but they also bring happiness. That is what life is.” (Director Baek Jae, Baby Faced Beauty)
I love this quote because, well, I often feel bad when I make others worry about me. But at the same time, I’m happy that someone cares and worries about me. And that makes me feel bad too. But when I watched this drama and heard this quote, I think it makes sense. That’s just how life is. For example, I’m often worried about how my family is back at home. But I’m also happy to know they’re fine. So I guess it’s inevitable. We’ll worry about someone but they’ll make us happy too. Someone is gonna be worried about us, but we make them happy too 🙂

9. “It’s okay for a man to look up to another man. Just don’t let that person blindside you or you’ll lose who you are. You are the main character of your story.” (浮浪雲[はぐれぐも])
I’ve reviewed this anime, you can read it here, no.15. And I really love this quote. Often times, we admire people, we adore them, we want to be like them. Often, we become so obsessed about becoming like them that we lose ourselves. But that’s not right. No matter how much we love, adore, or look up at someone, we should also focus on ourselves because, again, we’re the main character of our story, of our life. 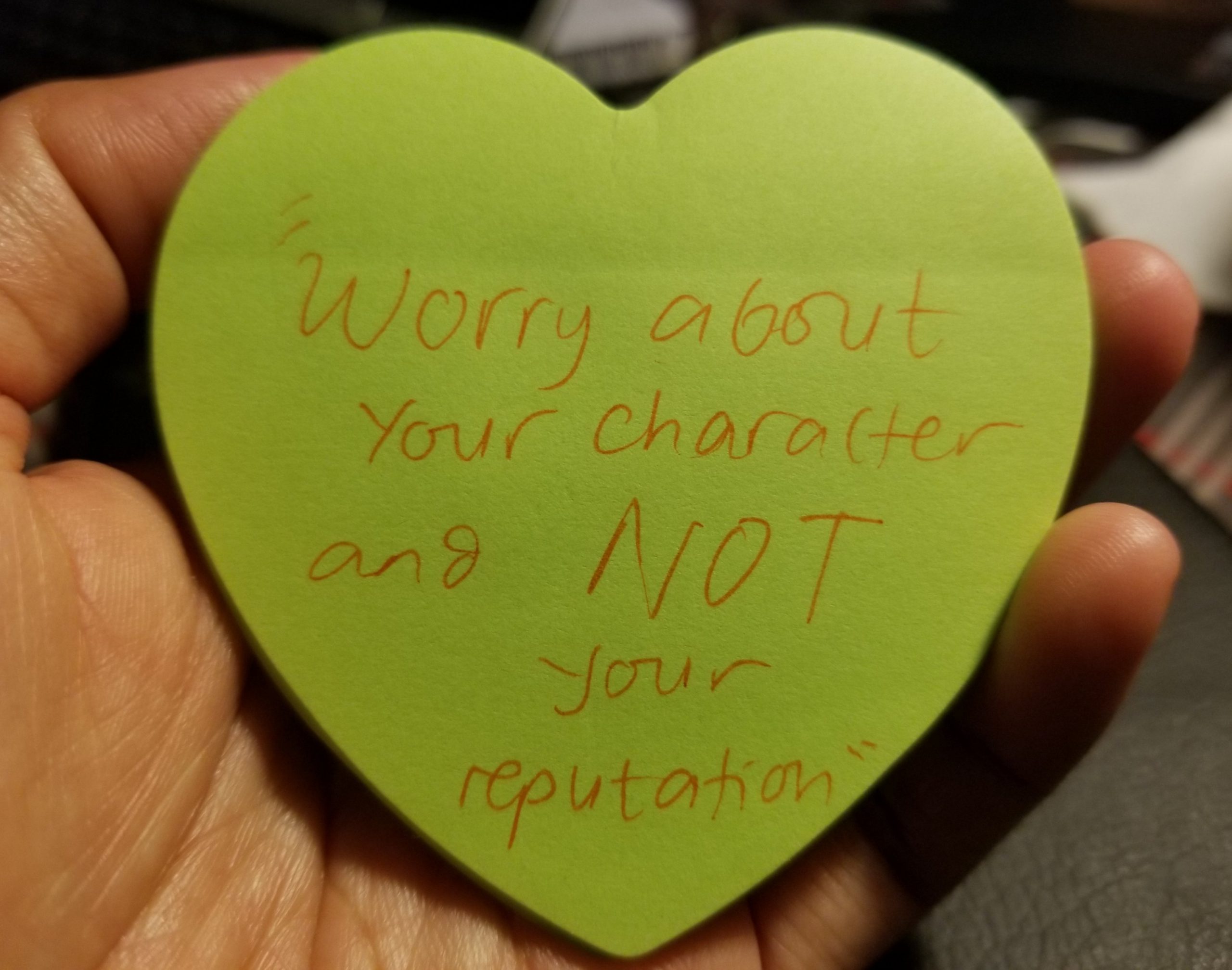 10. “Worry about your character, not your reputation. Your character is who you are; your reputation is what others think you are.”
I don’t know who originally says this. I found this quote from someone who posted it on Hello Talk. And I love it. I mean, again, sometimes we worry too much about what people think of us that we lose a sense of self. Instead of becoming better than our old self, sometimes we simply try to please people and make them like us. Well, it is understandable, I know. Everyone wants to be accepted and liked. Who wants to be hated or rejected? But I think we should know the limit. And what’s important is, we should not fake something for the sake of reputation. If we want to have a good reputation, then just be good. If we’re good but somehow our reputation is bad, then that’s fine as long as our characters are actually good. What’s worrisome is when we manage to have a good reputation but we’re actually not that good. That means we’re lying both to ourselves and others. And that’s not good. And I think that’s what this quote is trying to convey.

Well, I end up writing a lot even though it’s just 10 quotes. So I guess I’ll post other quotes in another post 🙂