This might be just another narcissistic act of mine, sending a postcard to myself. Why would you send a postcard to yourself? Don’t you have somebody to send you a postcard? Sending a postcard to yourself looks so pathetic. Don’t you have anything else to do for yourself? Well, I have no idea about what others think about it, but I think this is the best gift or souvenir I can give to myself when I am traveling. I don’t really like buying souvenirs such as T-shirt, hat, magnet, keychain or the likes. Not only are they usually pricey but also too much. I mean, what’s the use of so many different T-shirts, hats, etc? Just as a reminder? Well, postcards would be enough for that. It is cheaper and I can gift myself with what I like: a story, something I can remember or something that will remind me of the trip. Plus, I would get the stamps too. It’s cool. I kinda regret that I didn’t start doing it much earlier. I should’ve really started doing it since long time ago. But again, it’s better late than never.

But guess what? Sending a postcard is really not that easy, especially when we go to a place that does not have sending-and-receiving-a-postcard culture. First, it’s hard to get the postcard, second, it’s hard to get the stamps. Well, the postcards are usually easier to get but the stamps are usually only available in the post office. That kinda sucks.

The first postcard that I wrote to myself is from Japan. I bought it in my first transit when I was going to Philippines, but I didn’t get to send it straight because it was kinda difficult to get the stamps. It’s either the post office has closed or was still not open. Fortunately I got the postcard in the airport and I had no idea where else to get them outside the airport. And about the stamps? Well, it’s such a drama. So in my first transit, I was in a hurry to board, and in my second transit it was no different. But at the second transit, I had already written my postcard and so it was ready to send. I tried to buy the stamp in the post office near my hotel but it wasn’t open yet and when I got to the airport, the people in front of me, who were also in line for the post office service, took so long. (Actually it might have been short, but I was in a hurry, so it felt so long. You could read more about it later). I was really in a hurry that when the post-office lady finally got to serve me, I just paid and left the postcards there. It was terrible. But guess what? It arrived very fast. I sent it on June 5, 2018, the day I flew back to the States, and I received it on June 13, 2018. It was only one week after I got home. It was the first postcard that I received from myself when traveling abroad, even though it was actually the second postcard that I sent. 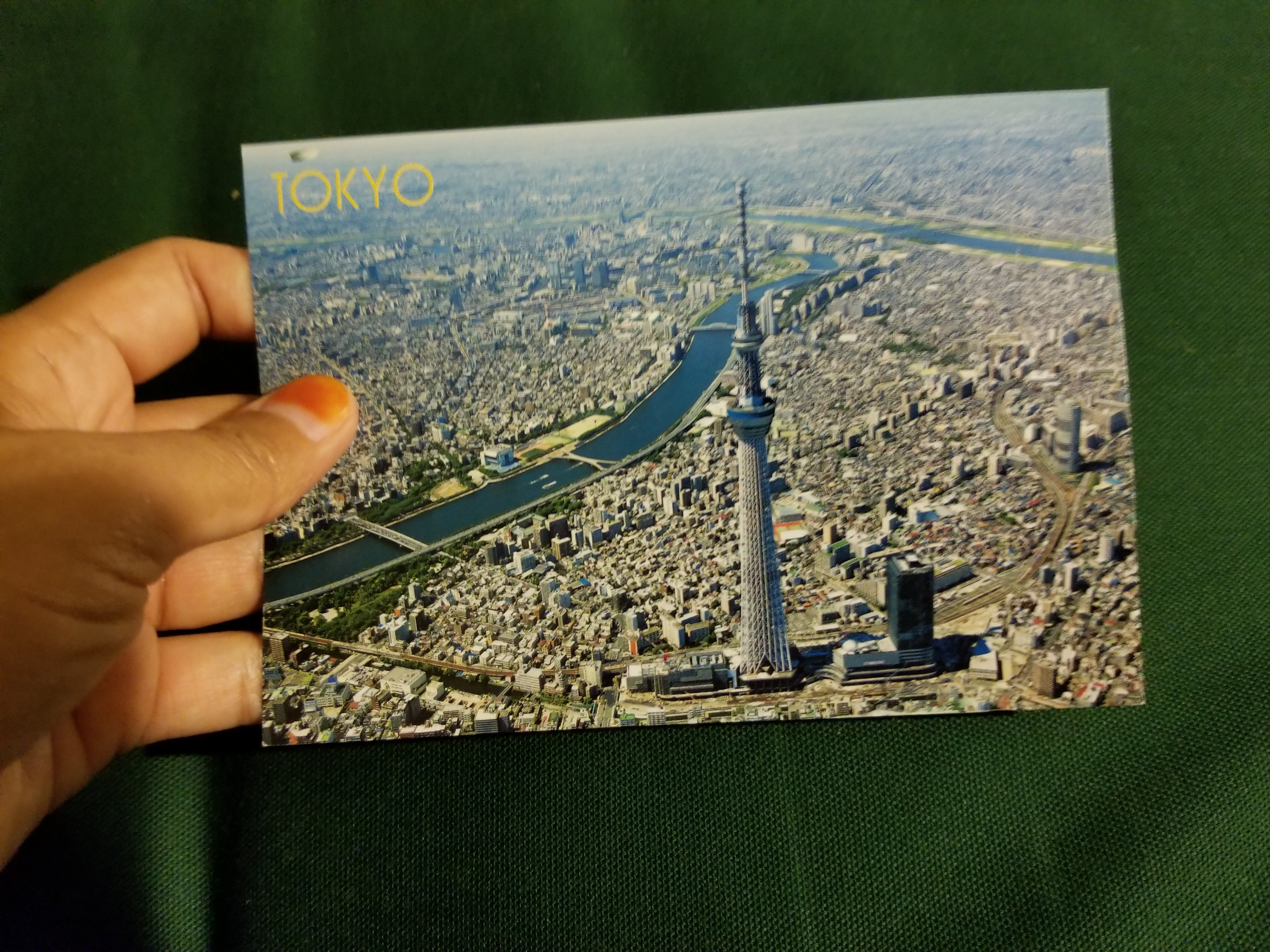 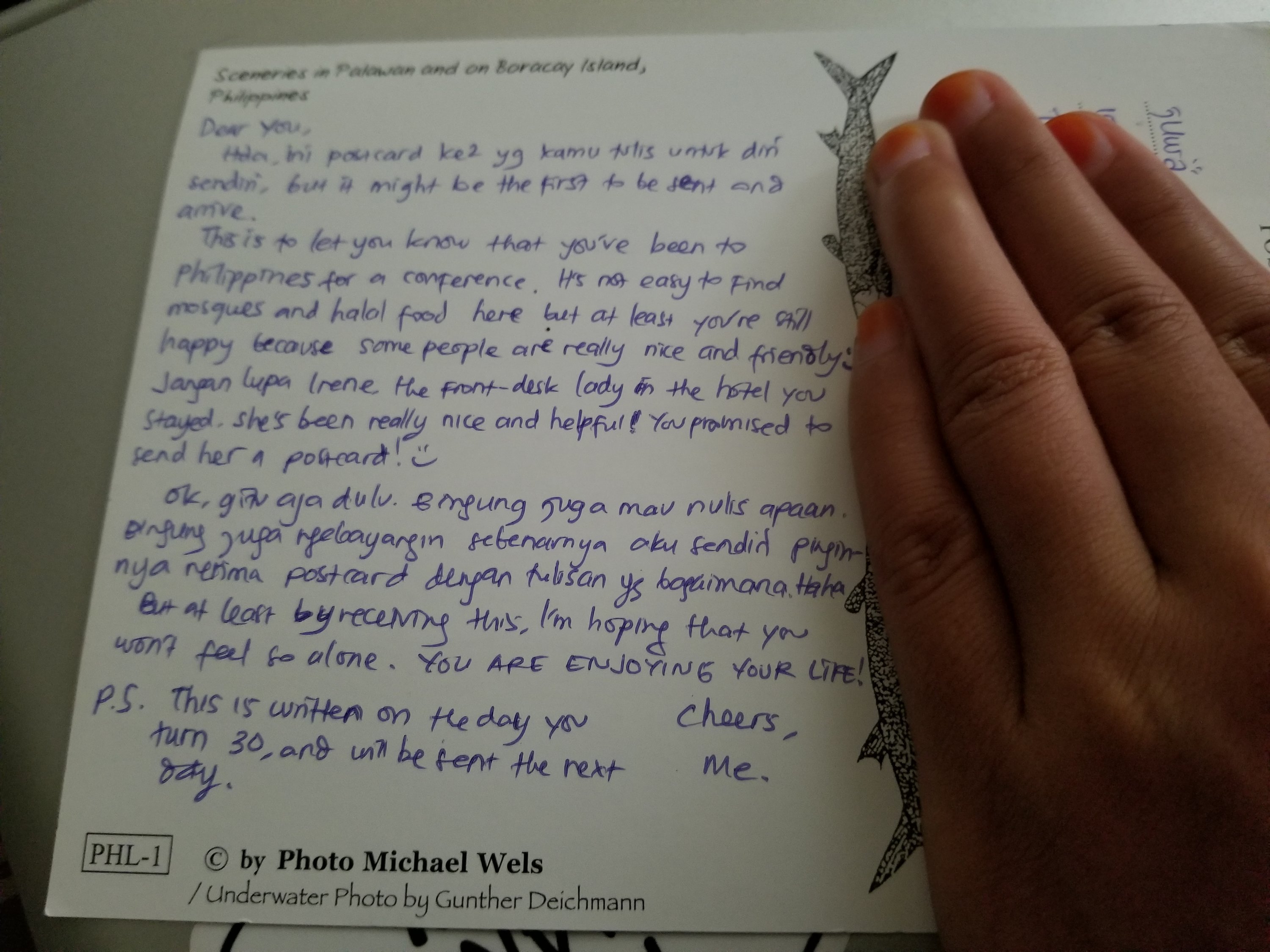 Again, only the post office provided the stamps and it wasn’t that easy to find one. When I tried to get my stamp in the Philippines, I got to the wrong place. My tricycle driver, who was supposed to take me to University of Philippines (UP), inside of which was a post office, mistook me to UP Town Center instead. And when I asked the security there if there was a post office or if they had any counter that sold a stamp, he said there was none. So I asked the direction to UP. It was only 20ish walk actually, according to Google. But I was already tired. Besides, I had my backpack with me already since I had checked out of the hotel and it was my last day in Philippines, and it was on my way to the airport, so you could imagine how tiring it was walking with a heavy backpack around. (It’s a note to myself to always travel light. At that time I couldn’t because I took my laptop and extra shoes for the conference!). So I was kinda upset. I didn’t want to take another tricycle because I didn’t want to spend any more money. So I kept walking, but I was upset – and sad. Sad, because I was fasting, I wasn’t supposed to be upset. 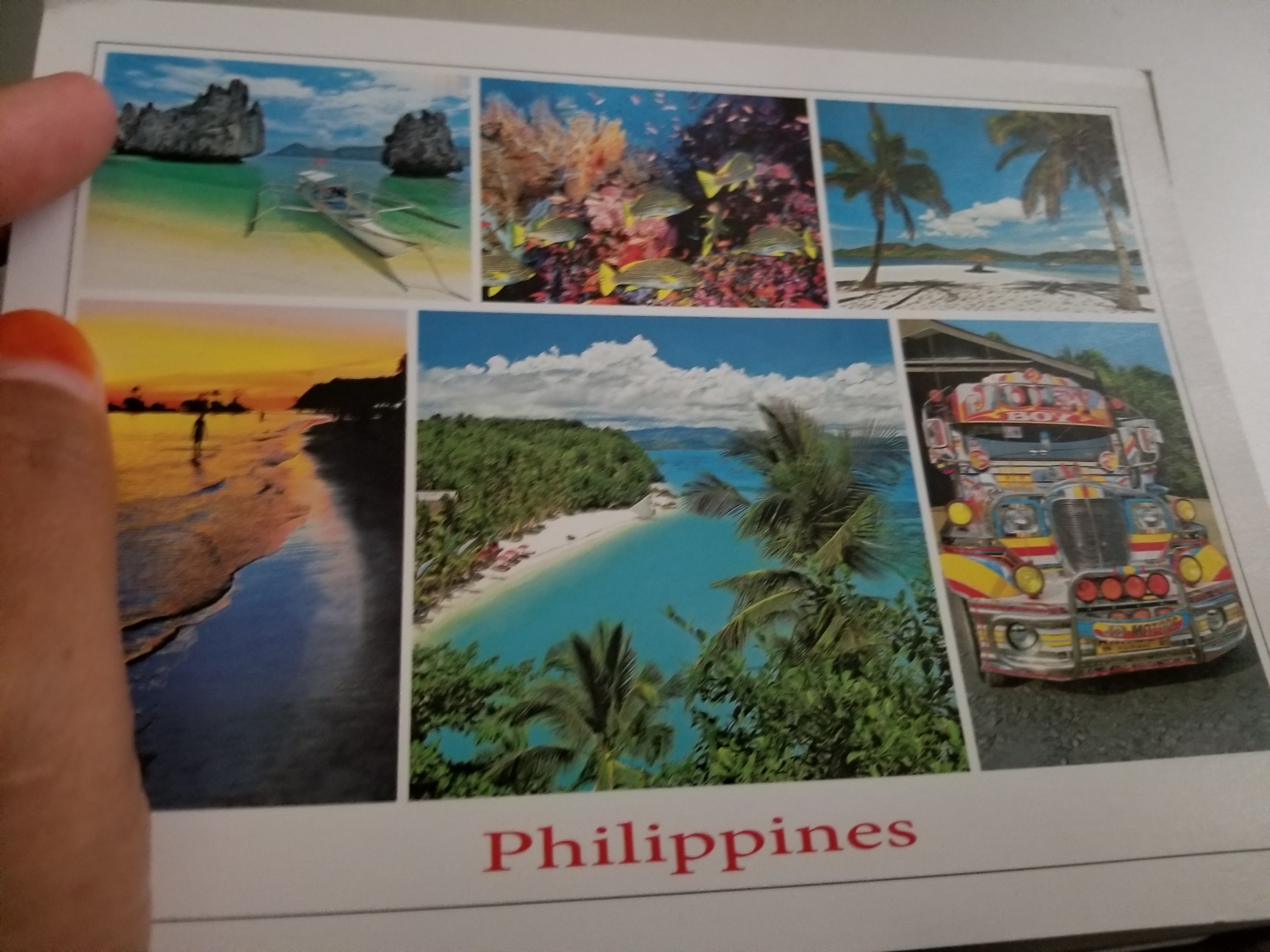 I kept walking to UP while looking at the online map and the direction to the post office. I was like, “When will I arrive?” It felt so long. My backpack felt so heavy. Gosh, it wasn’t nice at all. Then there was the jeep. I just took my chance. I asked the driver if he was going to pass the post office and he said yes so I hopped on. Finally! And guess what? It was really cheap. It was only 7 PHP. I couldn’t believe it myself. When I arrived at the post office and asked the driver how much the ride was. He said “seven po”, I was confused whether it meant 7 PHP or 17 PHP. I mean, 7 PHP was so cheap so maybe it was 17 PHP, that’s what I thought. So I handed 10 PHP and waited for his reaction. I mean, if he waited then I would give him 7 more PHP. But he returned the 3 PHP to me. So it was 7 PHP. God, bless honest people like him 😊

In the post office, I asked for international stamp, and if I wasn’t mistaken it was 15 PHP each, but I would need 2 stamps for one postcard so I wasn’t sure if I paid 30 PHP for each postcard or if each stamp cost 7.5 PHP. I tried to find the receipt but I couldn’t find it and I didn’t remember receiving any receipt, so I don’t know but if I remember correctly, in total, I paid $60 for the stamps and I sent 4 postcards (one to me, one to my friend in Japan, one to my friend here in Tucson, and the other to a friend in New York). And as far as I remember, I felt that the stamps were cheaper than the postcard. When I bought the postcards near the Ateneo de Manila University, I felt robbed because, first, the cashier could not figure out how much it was, and when they were checking, I saw it was 15 PHP, but then I had to pay 30 PHP for each postcard, as printed in the receipt, so I was kinda wondering if they charged me more, like selling me the 15PHP postcard but registered it as 30PHP postcard. I was upset. I came to believe that it was the actual price only after I bought the other two postcards at Fort Santiago, it was 25 PHP each, so I guess it was the normal price so I was okay. But looking back at the prices of both the postcards and stamps in Japan and Philippines, I guess the stamps were indeed cheaper than the postcards. In Japan, I got the postcard for 100 yen each and the stamp for 70 yen each. It’s the opposite from the US, the international stamp here is much more expensive than the postcard. I can get the postcard for $.25, but the stamp costs me $1.15. Jeez. But, well, it seemed that the postcard that I sent from Philippines took longer to travel to the US. I sent it on my last day in Philippines, which was June 4 and I received it on June 15, 2018, right on Eid Al-Fitr day. But guess what? I sent the postcard to Irene from the US on June 6, 2018 and it arrived on June 14! Apparently, the postcard that I sent from the US traveled faster to Philippines than the one I sent to myself from Philippines to the US. It’s interesting.

But anyway, I really enjoy doing this, sending a postcard to myself. I always freak out about memory loss, so if somehow I happen to lose my memory, I would want to know how I was or at least how I wanted to be through my postcards or the stories I wrote here or somewhere else. I don’t know, at least it would tell me how I was feeling when traveling. Like, for instance, I could remember how terrible I felt at one point when I was traveling to Montana, Wyoming, and Idaho. I could also remember how I could not find a beaufiful postcard when in Idaho so I just bought o plain one in the middle of nowhere there. But in all, it told me a story. I felt like myself as another person communicating to me and trusting me with all her stories, feelings, and experiences. And, again, I think I should’ve started this much earlier. Or, maybe you want to try to do it yourself? 😊