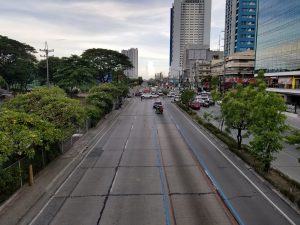 On the way to the hotel from the airport, I looked around the town from inside the Grab car. It was messy. I mean, it was not so much different from Indonesia. But then I guess I was too tired so I fell asleep even before I arrived in my hotel. I just woke up when the driver told me that we had arrived. I wasn’t sure how many times he’d told me that, but I was glad to finally arrive. But I have prepared the 510PHP fee, I didn’t have the exact change so I just prepared 520PHP. I thought, if he had a change, then I could get 10PHP in return, but if he didn’t have a change, then I could give it as a tip though, as I browsed, I knew that Philippines is not really a tip-country like the US. But when I arrived in the hotel, I was too exhausted, so I just handed all the money and headed straight into the hotel. I wasn’t sure if he tried to return the change or not, but I didn’t care anymore. I just wanted to rest and sleep, and prepare for the conference. (But later I am glad I headed straight into the hotel, because a friend I met at the conference, who ordered Grab on their own – without the help of Grab guy at the airport counter, said that it was cheaper but they still had to pay for the freeway fee. I wasn’t sure if I should still pay for it considering that I had paid higher, but I really don’t want to feel bad about it, considering how expensive it had been :/) 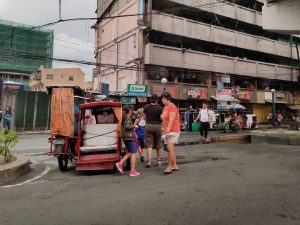 Anyway, as usual, I tried my best to observe how Philippines was. I mean, to give it my own perspectives. And this time, let me talk about the public – local transportation. First, I used Grab if I wanted to go somewhere a bit far because I felt it was safer, more comfortable and convenient, though, yes, it was usually more expensive. There was no Uber or Lyft but then I learned that Uber had been present but then it joined (was acquired by?) Grab. I only wish there was Gojek, the motorcycle taxi popular in Indonesia. But anyway, I think one of the “sensations” (or adventures?) when going to a new place is trying the local public transportation. We can’t really say we’ve experienced the local cultures if we hadn’t tried the local transportation. And guess what? Using the local public transportation is usually much cheaper. Well, at least how it is in my country, in the US, and here in the Philippines. For example, from the hotel to the conference hall, my friend used Grab and paid around 50 PHP, while I used tricycle (one of the local transports) and paid only 30 PHP. Well, for someone who’s stingy or wants to save money like me, as long as it’s good with my schedule and I had time, of course the tricycle is more preferable 😌🤗.

Tricycle itself is basically a motor-pedicab. It’s like the traditional pedicab we have in Indonesia, you know, with three wheels. Only, tricycles were operated using a motorcycle. And instead of putting the passenger seats in the front like pedicabs in general, they put the passenger seats on the right side with a cover on the up and front as well. The compartment looked like Indonesian “bajai”. And usually it only fits one person, but if you’re thin or slim, maybe it can fit 2 people. Plus, one more person can ride at the backseat of the motorcycle. And it is public, it is also private. I mean, if you are alone, the driver is not going to pick up another passenger on the way to your destination. But even if you are with another person, you can ride it together and pay the same price as you would if alone. You pay per ride, not per person, so if you’re with a friend, it can be cheaper. 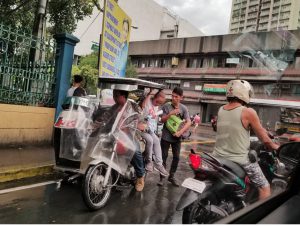 Besides, the tricycle drivers have their own groups based on the destination regions. For example, I can go to the conference building using only a certain tricycle that cooperates with the campus; i.e. tricycles that do not join/cooperate with the campus won’t be allowed to go inside. There are also places that the tricycles seem to not go. My friend wanted to go to the Eastwood mall, and every tricycle she stopped refused to take her there. They said she should take a taxi (or Grab). I was actually worried that I would be charged more if they knew I wasn’t a local. At least that’s what they do in some parts of Indonesia: they charged the foreigners higher. But thankfully, mostly the fare was fare. Maybe because the hotel staff helped me find the tricycle and I already asked them how much I should pay the driver. But there was this one time when my friend and I stopped tricycle on our own, from the hotel to the conference building, and we were charged 10 PHP higher. 😔🙈😅

The second local public transport was jeep (that’s how they called it). It’s like a pickup car/truck, but with some seats on both sides (inside) and a roof. The lines were various, like usually we have buses going to point A passing a certain route and there were also buses going to point B with a different route, etc. The jeep was like that. And like the tricycle, we don’t have to wait at a certain stop (like bus stop) to get the ride. We can literally stop them anywhere and get on instantly (as long as there was space😌🤗). Unfortunately, the writing on the Jeep was not always in English; some of them were mixed with the local language so I had no idea where they were heading or if they were going through my destination unless I asked 🙈😅 Taking Jeep ride was also much cheaper. For example, I went to Fort Santiago using Grab and paid more than 200 PHP, but the hotel staff told me, if I took Jeep, I would only need to ride the Jeeps 3-5 times and paid 16 PHP for each Jeep. But because I had no idea where I should get off the first Jeep and which Jeep to take next and which direction, etc. I couldn’t really risk it. I couldn’t afford to get lost especially because I didn’t have much time so I decided to take Grab even though it was much more expensive (I was playing rich. LoL 😌🤗). But well, yes, if I am confronted between the two (time and money), I’d prioritize my time if possible. That’s why I have to save because there are times that make me pay much higher to save time (this is just another info about me). My experience riding Jeep was when I was trying to send a postcard. It was another drama so I’d write it in another post ^^ 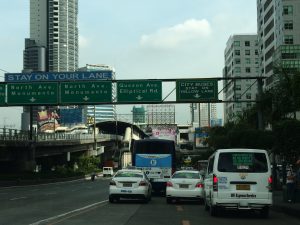 Then, the other public transport was bus. I didn’t get the chance to get on one but it seemed to me that the buses were used for between cities, or far distances. I can’t tell much but at least now you know that there are buses there.

And like what I found in the airport, the American standard thing, you know, I notice that in general it is like the US. Instead of using left lanes like most of Asian countries, they used right lanes like the US. There were also several different gas stations that displayed the price of the fuel like they do in the US (unlike in Indonesia). However, while in the US it is self-service, in the Philippines it is not. It is just like in Indonesia where they have people serve the drivers. I think, somehow, Philippines is kind of a mix between American regulations or cultures with local (typical South East Asian (except Singapore) cultures). There were people selling food on the sides of the roads. There were people loading, stopping, or parking in the curbs. And even though they had the layover bridges, it’s easy to find people jaywalking or crossing the road “pretty much anywhere” and not in the crosswalk and it seemed normal since everybody did it.

Well, I guess that’s all. At least that’s what I have experienced. Things might be different in other parts of Philippines, though. I love Philippines especially because the people are nice and friendly 😊