Skip to Content
Home Blogs Auditing Japanese HelloTalk: Learning a Language through an App
by 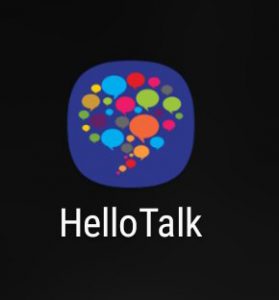 I don’t usually review a product, but I guess sharing is caring, no? And the best way to advertise is to make your users/customers happy, right? And I’m that happy user/customer now. But as usual, I really need to tell the background story, (which you can actually skip through paragraph 4).

Long story short, I decided to take some time off my social media the first month of 2019. I cannot really tell you why because I myself am not sure why. I guess I just want to get myself busy with something else. (Though yeah, I kinda want to focus on my study, and social media are such a distraction. Ugh, actually no. I just want to be alone.*But I want friends too, ugh, being a Gemini is surely frustrating! **Well, it’s the drama, but the truth is that I always take some time off my social media once in a while but I admit that this time was the longest, and simultaneous across my social media platforms:).

But you know I’m still learning Japanese, right? And I don’t know why my WeSpeke App suddenly stopped working. (Btw, WeSpeke was a language learning app, an app to chat with other language learners around the world, which I knew from a conference I attended at the end of 2017). I knew I hadn’t been on it for a long while, but it suddenly logged out and I couldn’t even log back in. They said it’s still under development. But I really wanted to practice my Japanese because I don’t want to forget what I’ve learned, so I was kinda frustrated and desperate trying similar app just for “chatting”. I even installed Tinder after reading this article saying that they have Tinder social, which we can use not for finding a romantic partner. But I uninstalled it right away. LoL I mean, I thought I could connect to Japanese speakers through this app, but after I installed Tinder, it just showed me “nearby people”. ざんねんですね。And thinking that all those guys shown in the app would look at me with the thought of finding a romantic partner just freaked me out. I mean, at this point I wasn’t sure if I was actually scared of falling in love, but that’s not why I installed the app, and that’s not how I want my love story to begin. Big no. I mean, I respect people who are courageous enough to find their soulmate through such apps-with the thought of finding a romantic partner since the beginning, but for me, it’s just no. No. No. Simply no. Love should happen naturally. That’s how I want it to be. I know it’s too idealistic, maybe too delusional, and maybe that’s why I’m still single. I don’t care if I have Cinderella complex or such. At least for now, I want to keep that delusion, fantasy, or whatever you call it, intact. Okay, enough on this topic. The point is that: I finally uninstalled Tinder right away.

So I decided to uninstall WeSpeke from my phone. I thought, maybe if I uninstalled it and install it back it would work normally again. I was wrong. After I uninstalled WeSpeke, I went to PlayStore and tried to search it but it’s just not there. And that’s how I found this app: HelloTalk. I read the reviews and they say it’s good so I decided to give it a try and I fell in love – with the app. I mean, the features are great. It’s even better than WeSpeke. I remember when I was on WeSpeke, some random guy often sent me messages even though they didn’t actually speak the language I was learning. Jeez, so annoying. But that’s now how it is with HelloTalk. Man, I was actually in a horn of dilemma, whether to share it with others or to keep it with myself. LoL だって、sometimes when we have something cool, we kinda want to keep it to ourselves so we can be the only one who is cool, right? Haha But, well, I guess, if I benefit from this app, then maybe others can benefit the same 🙂 Though actually at first I was skeptical, because, well, you know I’ve got a trust issue. I even denied their access to my email and such. But then it wouldn’t work so I eventually gave up and gave them the permission to access what is needed to make the app work 😀

So, here are why HelloTalk is really cool. I know there are many language learning apps out there, but since I haven’t really tried them, I cannot compare and cannot say if they share the same features or if HelloTalk is better. Let’s just say I happen to find these features in HelloTalk. The tagline is actually HelloTalk: Talk to the world. And it’s true, because it facilitates communication really for learning a language with everyone around the world. There are many options of the languages we can learn and teach as well. We can learn Korean, Chinese, Spanish, German, etc. There is an option to be a VIP member too, with which we can learn and “teach” more than one language and can translate unlimitedly. But I just use the basic because VIP membership isn’t free. Haha Jeez, I’m so stingy, aren’t I? Well, I can’t help it. 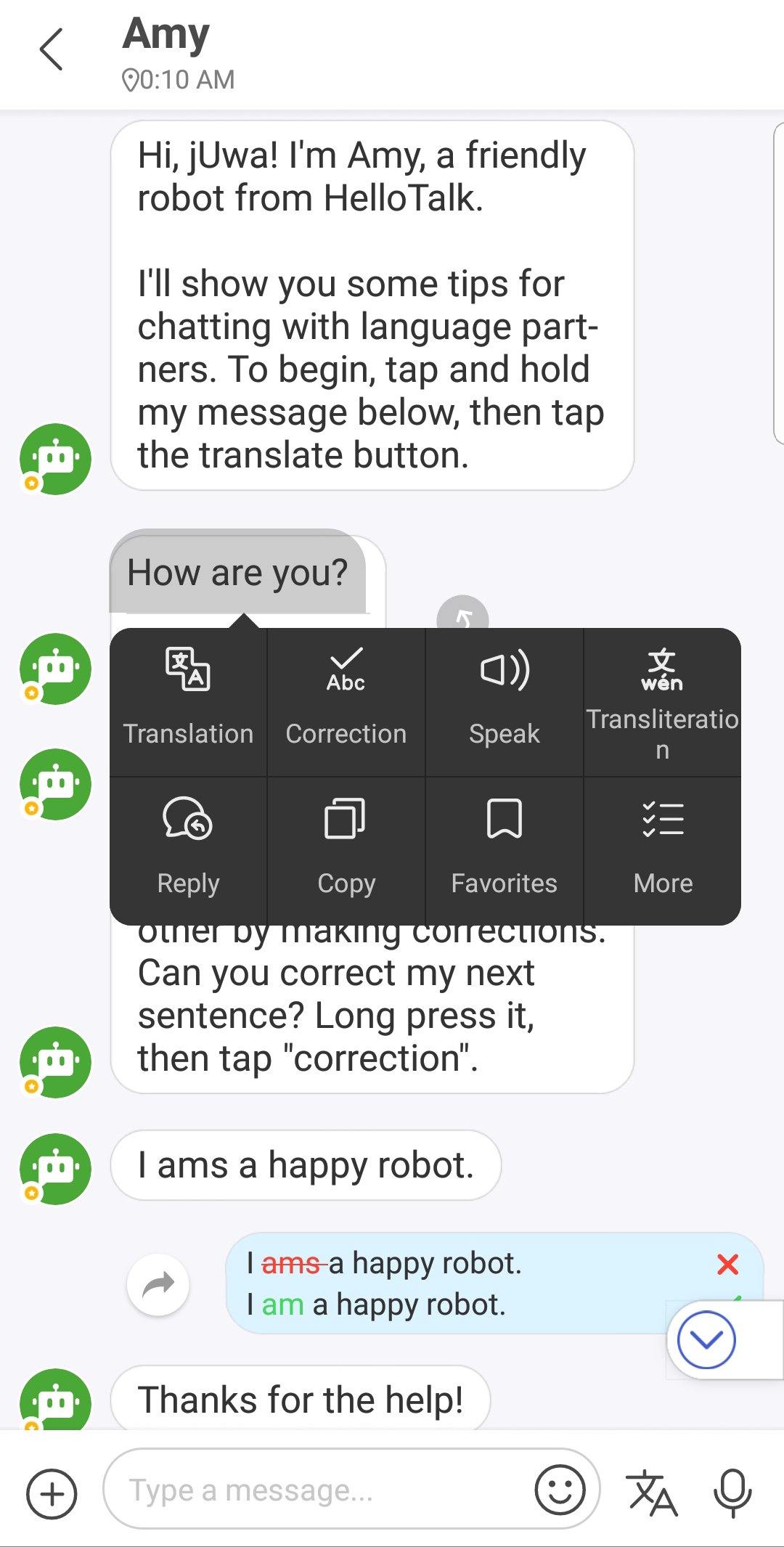 Anyway, in HelloTalk, we can set our native language and the language we are learning. I set my native language as English for obvious reasons, right? I mean, if I put Indonesian/Madurese/Javanese as my native language, I doubt anyone would chat with me; and even though I speak those languages well enough, I am not sure if I can teach them well. I mean, those are the languages that I acquired or perhaps learned for granted. English is different, so I think I can teach it better. That’s what I learned after all. And, if we were to talk about symbiotic relationship, then the relationship in using this app is supposed to be “mutualism”, in which you can benefit from each other. For example, my target language is Japanese. I’m not sure how many Indonesian/Madurese/Javanese learners (if any🙈😐) in the app would be able and willing to teach me Japanese. But I’m sure many Japanese speakers are learning English and I am confident that I can help them with that. だって, I’m an English teacher, no? People also say that my English is really good :p So, this way we can benefit from each other. They teach me Japanese, and I can teach them English. But it’s kinda “hard,” though. It’s because they want to practice their English while I want to practice my Japanese. Haha And sometimes, even when I want to help them, I can’t really because I don’t know Japanese enough to know how they want to get their Japanese sentences translated into English. Jeez, I guess to teach a language will be easier if we know both the first and the target language. That way allows us to feel the nuance and thus to express it in the target language correctly and more naturally.

Another good thing about HelloTalk is that we can set it up to show the exact match of the languages we know and are learning. For instance, since I put English as my native language and Japanese as my target language, and since I only allow the exact match to appear in my timeline, the people showing up in my timeline are only those who either speak Japanese, learn English, or learn Japanese like me (they call it “classmates” 😆). This way we can really focus on learning the language instead of just sending messages to or getting messages from random people. I mean, it’s annoying, no? I read some profiles, and many of them said, “no romance”, “I’m here to learn a language not to find a boyfriend/girlfriend”, etc. Jeez, I guess some people really misuse the app to the extent that it makes people feel tje need to write such things :/ I mean, if you fall in love while you’re learning the language through the app, that’s fine. But if you’re playing romance with someone who doesn’t even want it, that can be disturbing. But, well, you can also set it up differently to allow everyone shown in your timeline and to let yourself appear in everyone’s timeline even though you don’t share the same native or target languages. (I guess). And, oh, you can even set it up so that you can see and appear to only those of the same gender if you want.

What about me? Well, I’m naturally not romantically attractive, so I don’t expect anyone to have romantic interest in me. I mean, even the “real people” around me do not fall for me, why would these people in this virtual world do, right? Besides, I watched some video and also observed the posts, it seems that Japanese people are more interested in either Japanese or white people, so I don’t think I’ll stand a chance. Haha But, well, maybe that’s better that way so I can focus on learning the language. But, okay, I’m open to possibilities. Hahaha (だって, we’re talking about Japanese here! 😆 *On a more serious note, nope, this app is seriously designed for language learning).

Ok, back to the HelloTalk app. Another cool thing about it is that you don’t have to follow people to get/give some feedback or such. Your post would just appear in the timeline of those speaking the language you are learning, and if you’re lucky, they would correct/teach you even though you don’t follow each other. It’s really “no string attached” but still beneficial for each other. And anyway, I say “if you’re lucky” because I myself do not always correct people’s English. I just randomly give correction when I feel like it. That way nobody feels compelled to correct each other. However, since there are many app users, I guarantee they will always be someone to help you. I myself follow only few people, mainly those whose posts share knowledge about Japanese, cultures, and such. And of course, the ones that agree to help each other. I found some, actually, but maybe I should talk about it in another post 😀

In addition, with this app, we can also record videos and post pictures. I myself often sing Japanese song and wrote something in Japanese. Haha Sometimes I see people posting English questions and texts and ask question about it. I wonder if it’s actually their homework or such. I mean, many of them are still really young. (And, ugh, I don’t show my age because I don’t want people to be concerned about it. Age shouldn’t matter in language learning, right? I mean, at least in this situation where we’re not talking about golden age and such ^^).

But maybe this is the coolest thing about this app. We can translate, make correction, see or listen how it’s spoken, etc. The translation feature lets us know the meaning of the sentences when we haven’t mastered it. Well, the translation might be imperfect but I guess it’s not bad. The correction feature also allows us to see which part is wrong and how the correct version looks like. It’s really cool. I really love this app. And I found some really really cool language learning partners. I’ll tell the story in another post ^^