Skip to Content
Home Blogs Auditing Japanese Learning: There’s No Shame in Not Knowing
by

Hello, I’m back with my try-to-reflect-on-my-experience post. Well, actually I posted the brief version of it on my Instagram, but in Indonesian. I thought I might as well share it here in English and elaborate a bit. (You can skip the next paragraph, though, ’cause it’s just a long introduction and I simply couldn’t skip that part🙈✌).

So, well, I’m now joining a free Japanese class administered by a local university here. I got the info from a friend who works at that university. I was excited ’cause I thought I could finally continue learning Japanese in a class again–in a more structured way (I hope!). So I chose to join the advanced class ’cause I was no longer a beginner. After all, I have learned Japanese up to the low intermediate level in the US. (I wrote my experiences here!). I was also curious about how the class would be carried out. I’m craving to learn not only as a Japanese learner but also as a foreign language teacher myself. I am curious to know how different it would be from my Japanese classes in the US, aside from its being online.  There was also a pre-test that I should take, but I got one question wrong, not because I didn’t know the Japanese but because I read the clock wrong. The picture showed the long hand of the clock pointing to 12, and the short hand pointing to 11, so I instantly thought it’s 11.55. But I was wrong because the test meant to ask how to say 12.55 in Japanese. I mean, I’m capable of saying both 11.55 and 12.55 in Japanese, so…but, well, I think the lesson I could learn as a language teacher: We should be careful in crafting our questions and make sure they measure what they’re supposed to measure. (In research terms, we call this “validity” issue.) In my case, the question I got wrong would make me look like I couldn’t tell the time in Japanese, when it’s actually not the case, i.e. I got the time wrong, but my Japanese wasn’t, ’cause if I were to say it in my other languages I’d still get it wrong, i.e. it’s not about the language skill…

[You can start reading from here^^]. It was our first Zoom meeting. As expected, lesson wise, I didn’t learn much ’cause I’ve already learned it. (And you know I communicated with my Japanese friend regularly and we speak both in English and Japanese. Also, I’ve translated some lyrics from Japanese into English (here!)) So yeah, I felt like I didn’t learn anything new. BUT, aside from the Japanese lesson, there’s a new thing that I learned: using annotate feature on Zoom.

The teacher asked us to write the answer right on the screen that he shared using annotate feature on Zoom, and I had no idea what that was 🙃 I also had no time to browse/Google because it felt like a sudden instruction (or maybe I panicked so I didn’t think of Googling it first, Idk). I wanted to participate, so I raised my hand but then I said I had no idea how to write the answer on the shared screen. A student told me to see “view options.” But, all I could find was this: 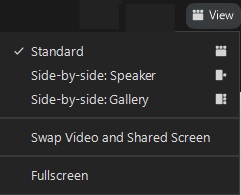 I could not find anything saying “annotate.” It’s frustrating. I had to write my answer on the chat space and another student wrote it on the shared screen for me. But I couldn’t give up. I must find that annotate feature no matter what, and I found it:

Well, that toggle(or tab? bar?) did not always show up, so that’s why I couldn’t find it earlier. I told the student who told me about it that I had found it. I thanked them and they said they were glad to help. And I felt “amazing.” Look? We can add draw, add text, etc. That’s cool!^^

I mean, I got a Ph.D. from a US university; and I’ve been using Zoom for quite a while, but that was the first time I learned about using “annotate” in a Zoom class. I didn’t even know it existed before (because when we need people to write on something we shared, we usually created a Google Doc and shared the link in the chatroom!). So yeah, people could’ve laughed at me for not knowing anything about “annotate” and I felt so very stupid myself; it’s pretty embarrassing. But instead of laughing at me, humiliating me, and judging me by saying, “How could you not know it? So stupid,” (though if they did judge, I didn’t know so it doesn’t matter😌✌🏻), they helped me. So I was really happy. I got to learn something new. And who knows that by sharing this story here, someone could learn about it too? 😊 I know I could use it for when I teach myself too 😆✌🥰

So, well, maybe this is a reminder for me to be more patient when people ask me things, for me to not quickly judge people for not knowing something that I think is common or basic. It’s because, well, what is basic and common for us might not be basic or common for people. And this is not just about using Zoom. I actually remember my Mom and Dad. Because they didn’t finish schools, and we were poor too, so there are lots of things they didn’t know–things that are basic and common for most of us. And again, it doesn’t mean they’re stupid. Like I said in another post (maybe here or here, I forgot. LoL): they just weren’t privileged enough to get the experiences or the opportunities to learn.

But, ugh, I guess we’re used to being taught to feel ashamed for not knowing something instead of being taught to celebrate and feel happy for finally learning and knowing something. Well, maybe both can motivate us to learn more and more. But when I think about it, the first feels like a “negative motivation”, while the latter is a “positive motivation. (I didn’t learn about psychology, so I might not know the right terms, but I hope you get what I mean).  I mean, when we’re told to be ashamed for not knowing something, maybe some of us would feel encouraged to learn more on our own because we don’t want to feel embarrassed. After all, nobody wants to feel humiliated. But there’s a limit to how much we can learn on our own. So many things we learn by interacting with others, by asking others. So when we’re taught to be ashamed for not knowing something, some of us might feel inhibited to ask others or inquire about what we don’t know due to fear of being humiliated, i.e. we don’t want people to know that we don’t know it. (And maybe that’s why some students don’t answer teachers’ questions in class unless they’re sure that their answer is right.) Well, some people might not care about such things, they don’t care about people’s reactions. They’re not afraid of asking questions. They’re not worried about being humiliated. But not everyone has such mental toughness, you know. For some of us, it can really affect our confidence, and it can make us feel insecure.

However, being taught with the mindset of “celebrate and feel happy for finally learning and knowing something” is different. It won’t inhibit us from learning or making inquiries because 1) we simply feel happy to learn something we didn’t know before, and 2) others also feel happy to be able to share what they know with those who didn’t know. We’re not afraid to ask; we won’t have to think, “What if this is actually something that everyone knows? Isn’t it embarrassing that I don’t know it?” We don’t have to think about such things. On the contrary, we just need to think, “I don’t know about this. I want to know it.” Full stop. No space for being anxious due to fear of being humiliated or such. Am I making sense? I mean, there’s nothing wrong with not knowing something. What’s wrong is if we refuse to learn… After all, we all had that period of not knowing something before we finally learned about it, right? Just because we learned it first or earlier doesn’t mean we can feel superior and look down on others or embarrass them for not knowing it sooner. And, by the way, I found this quote on GoodReads, “There is no shame in not knowing something. The shame is in not being willing to learn.” (Alison Croggon, The Naming).

Help me decide: Like I said, the class that I’m joining now is too “low” for me. It’s like learning in an elementary school when I already graduated from middle school. The teacher and my classmates are great; they’re nice people too, but to be honest, now I’m conflicted whether to continue or quit. I feel like I’m too “active” in the class too, and I’m worried that it will mislead the teacher to think that other students already understand the lessons. But also, it’s hard to keep quiet too because I’m also a teacher, so when the teacher asks a question and nobody answers, I feel like I have to respond because I don’t want him to feel ignored. So what should I do? Should I consult the teacher and tell him about this problem? But then I don’t want to appear arrogant by saying so because even though I believe this class is too basic for me, I know I’m not that advanced either. I just wish the class could be more advanced, teaching me something that I haven’t learned. So, any suggestion?

Other things I noticed: 1) I feel like I’m really active in this class, like more confident? Maybe because I’ve learned and known the lessons by heart? Back then at schools, I hardly volunteered to answer teachers’ questions or solve a problem unless appointed and put on the spot, even though I was pretty smart in Math, for example. I wonder why. 2) When I took Japanese classes in the US with English as the medium of instruction, the use of English was very minimum. Here, I noticed that Indonesian (as the medium of instruction) is used quite a lot. I wish Japanese could be spoken more. (But then when I did my research, I found the same thing with English classes, i.e. minimum use of English, and more use of Indonesian.) 3) My current teacher is Indonesian and I noticed that he pronounced a certain word differently from my Japanese teachers (they’re Japanese) back in the US. I’m not saying my current teacher is wrong; it could be a variation as well, but I wonder if I should tell them about my experiences. But again, I don’t want to pass as a smartass, you know. I want to and I do respect my teacher. So you see, I’m on the horns of a dilemma 😔💔 What do you think?