Skip to Content
Home Blogs Random Android: Free Some Space on Your Phone
by

This is not my usual post but I need to put it here and, in case you didn’t know, who knows it can be useful for you too.

Disclaimer: You can actually skip and go towards the end, the paragraph that starts with the bolded sentence 😉

Well, I’m an android user (can’t afford an iPhone and am not used to it. LoL). And, so, I own Samsung Galaxy 8 with 64GB internal storage, but lately I kept getting notified that I needed to clear some space, which was annoying because, dang, I don’t install that many apps and I have moved my pictures to my SD card. So what has caused this? I thought I have regularly cleaned my device, you know using Device Care or Google Files, so why it’s still taken up so much space? When I checked, something has taken up the entirety of the space leaving only around 1GB free/available. It says most of it is used for the apps, and I really thought it was ridiculous.

Hence, I tried to uninstall some apps I rarely used, but it was still taking up the space. Then, I remember that I can CLEAR CACHE! Well, I might have read someone tweeting about it before and might have bookmarked and saved it somewhere, but at that time I wasn’t so concerned because, apparently, I still had a lot of space, but now that I have got the problem, I feel like I need that but it will be too troublesome to scroll down and find it, but at least I remember the keyword: Clear Cache!

Well, of course I want to make sure that it’s okay to do it, i.e. clearing cache of every app installed on my phone, because, well, I don’t want to get rid of this problem but then encounter another problem after that, so I browsed, and…well, they say it’s safe. See the pics below. 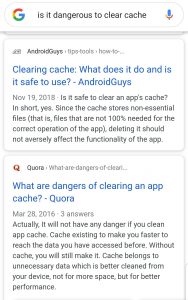 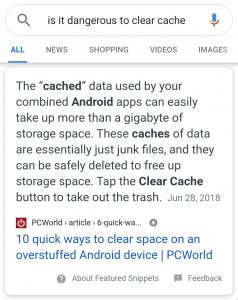 Well, actually, I usually cleared or cleaned my phone to get more space in general, in one go, using Device Care or such, but apparently it doesn’t clear the cache in every app, so I now I tried to go to each app and clear their cache manually one by one for each app. It takes time but it’s worth it. Like, for instance, before I cleared the cache, my internal storage was used up to around 63GB (I forgot to take pics ’cause I was upset and had not thought about posting it) but after I cleared the cache in every app, now I have more than 35GB. Isn’t that crazy? But, well, it’s embarrassing and shameful, but I guess the cache that took most of the space in my phone is that of Instagram. It was more than 20GB (for cache alone! It’s crazy!). It’s so much that my phone got lagged while clearing the cache and by the time I thought of writing a post about this and remembered to take a screenshot, it’s already cleared down to around 4GB (which was still too much) before it finally got to zero. See the pics below. The first if in the process of clearing cache while the second pic is after clearing cache. 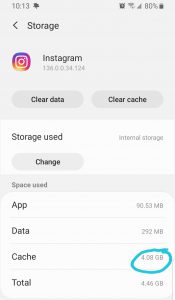 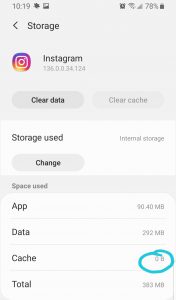 And as I checked every app, my mind went wild because, holy, there were apps that really took a lot of space with their cache such as Facebook, Whatsapp, Messengers, HelloTalk, etc., and even Google and Gallery! See the pics! (The top parts are from when the cache hasn’t been cleared, the bottom parts are after clearing the cache. See how much space you can save already?) 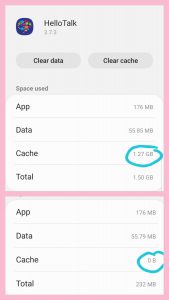 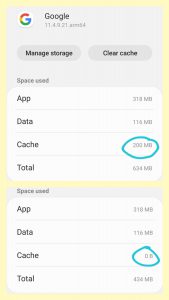 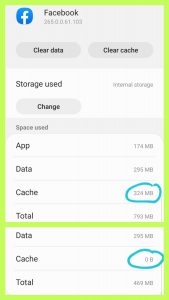 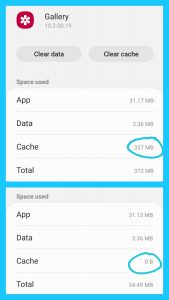 So, yes, after clearing each space I can a lot of free or available space on my phone. I am so happy. And, no, I encounter no trouble after doing all of that. In fact, I feel like my phone is getting lighter and works faster, so I kinda regret that I didn’t do it sooner. Still, I’m glad that I finally realized and did it. I guess I will have to manually clear the cache regularly from now on to avoid “having no space” problem again in the future 🙂 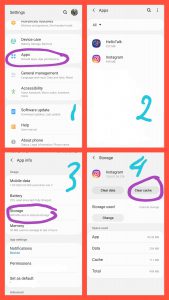 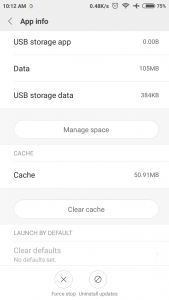 Tldr: Anyway, how do we do this? (I know this is the only part that actually matters for you. Haha But, well, you know I cannot NOT share my emotion upon dealing with this thing, so you just have to bear with me. Sorry). So, well, it’s actually simple. You just go to your phone –> settings –> apps –> Open app one by one –> Each time you open one app, find the storage –> Clear cache. Done. However, it can look different on different phone. Like for example, those steps I mentioned are how it is for my Samsung Galaxy 8 (See the first pic on the left). For my Xiaomi Redmi 3 Phone (see the second pic on the left), on the other hand, it is simpler, i.e. you just go to settings, find the apps, open each app, and you’ll immediately be given an option to clear cache.

Well, actually I have tried to ask in Samsung Community before, but the solution they gave me was no solution. I actually tried to visit the thread I made before there, but I don’t know why I wasn’t given an access, which is funny considering the fact that I am the one who made that thread. Sigh. But, well, I guess it’s no problem now that I have figured out how to solve this problem. I’m sharing this because I feel so slow to realize this. And I’m just wondering, has everyone known this already? Is there anyone who is frustrated from having the same problem and still hasn’t figured out a way to solve it? I guess I want to share with the latter, and if it can be of some help, I guess it will make me happy 🙂 I can only share with other Android users, though. I don’t know how it is with iPhone, though. So if iPhone users encounter similar problems, I don’t know how to help. But I hope they don’t have any problem considering that it’s already expensive :p