Dissertation and Covid somehow made me watch more movies, anime, and dramas. Well, what else can I do? I can’t travel, right? Sigh. Hence, I’ll share some more Japanese movies here. I’ll share my thoughts too since I made some polls about the story in my Instagram. Well, I’m just curious about what people would do if they were put in their shoes, i.e. if they were the characters in the movie. And, as usual, for other movie and drama recommendations, you can read it here. And before we start, let me apologize for writing all this stuff. It looks like my blog has turned into a review page for Japanese movies, dramas, and stuff. But, ugh, well, this post has been sitting in the draft for so long, and I don’t know what to write either, so let’s just finish this off. So, well, without further ado, let’s see what movies we’ve got today 😉

1) Kiokuya: Anata wo Wasurenai [The Memory Eraser]
Yamada Ryosuke from Hey! Say! JUMP starred in this movie. That’s the initial reason I watched this one, but I heard that this was from a famous book, so I became interested in the story. It’s about someone who has the power to erase people’s memory. If we want to erase something, we just need to find a way to get in touch with them and ask them to erase certain parts of our memory and we won’t remember any of it and everything related to it. In this movie, the story started with Yamada’s character who got forgotten by his fiancee. He was trying to figure out what happened to her and all. And that’s it.

And, I made a poll on Instagram. Surprisingly, many have memories they want to erase, things they wish to forget and not remember anymore. It’s kinda interesting. But like I wrote in the pic there, personally for me, I don’t want to forget. I want to accept. I want to remember and be okay. Acceptance is key, right? Besides, my past is a part of me and partly what made me who I am now. Not being able to remember it would be like losing a part of myself, and I find it kinda scary. I guess I’m the type who hates losing such things? I mean, I know I said I don’t really like looking at the past since the past is only there to make sure we can create a better present and future. But that’s exactly it. I want my past memory to be there. I won’t always remember them but I want them to be available when I need them. I want it to be there when I need to retrieve it. But again, as I wrote in the pic, no judging. People are different. Some past can be very painful for people and maybe it’s better to forget. But I really hope they can heal.

But what about you? Would you erase some of your past memories if you could? 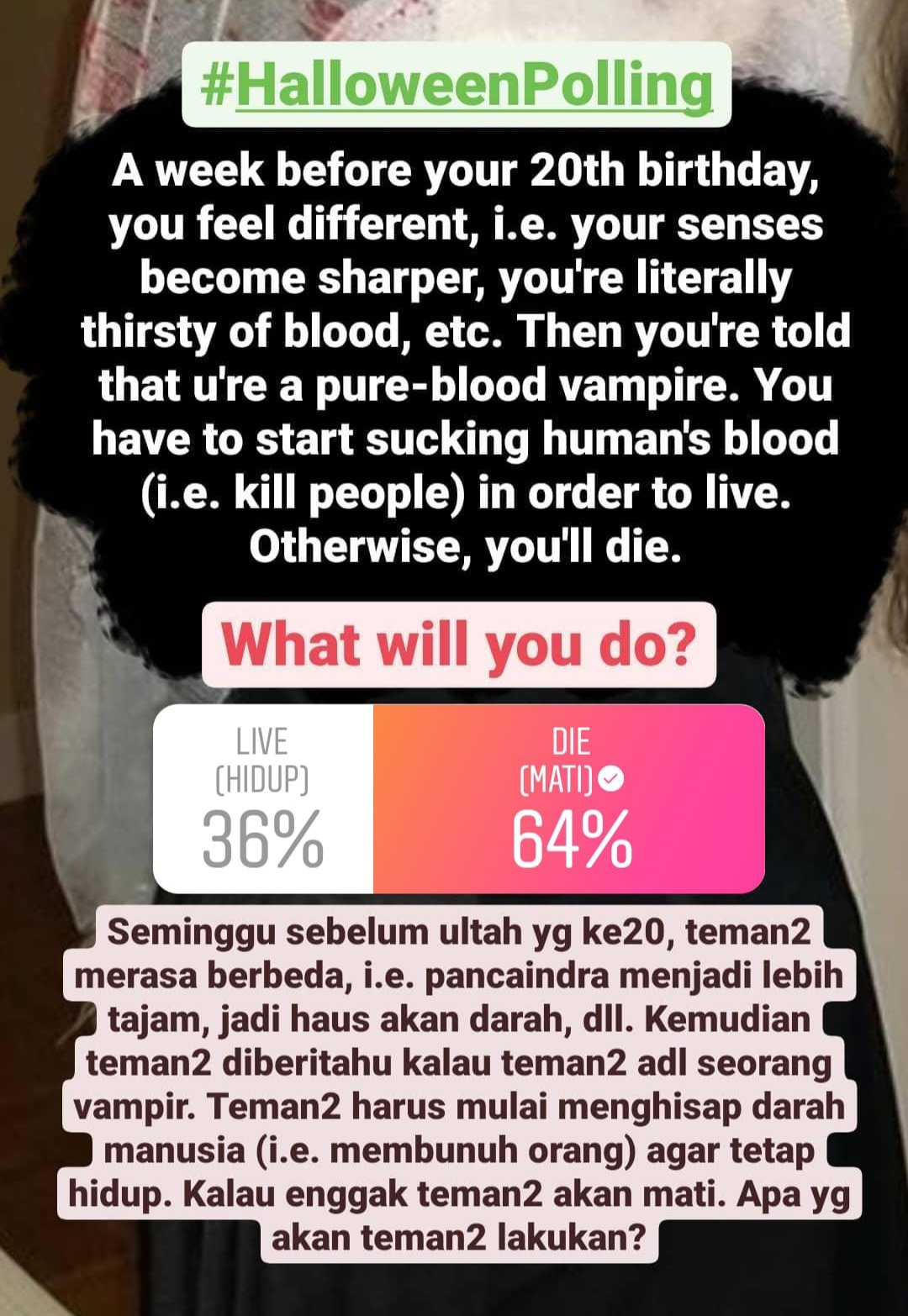 2) Vampire Stories: Brothers
This one is “interesting.” It’s about a vampire who was raised as human and one day when he was about to turn 20 he was told that he was actually a vampire and had to suck blood in order to survive and keep on living. He was in a horn of dilemma as he didn’t want to kill people. He loved his human family and all. But if he didn’t suck blood, he’d die. Well, the idea is interesting, but the execution is not that good, so when I watched the movie it felt so-so. Not sure if it’s because the actors and the actresses weren’t famous. But like, the “feelings” didn’t really reach me 🙈😅✌

But, I also made a poll for this on Instagram. And look, many chose to die 🙈😅✌ Well, as for me, I don’t know what to do. This is one of those times I become super indecisive. LoL But maybe I could live and kill the bad people? But it doesn’t feel right, though. So maybe I should just die? That way I don’t have to suffer the worldly ordeals. I mean, I don’t want to live forever. It’s gonna be too boring. Life is precious and meaningful because we know it’s going to end someday, which is why we try to make the most of it. Don’t you think so? What about you, though? Will you keep living as a vampire? Or will you die pretending to be human? o.O 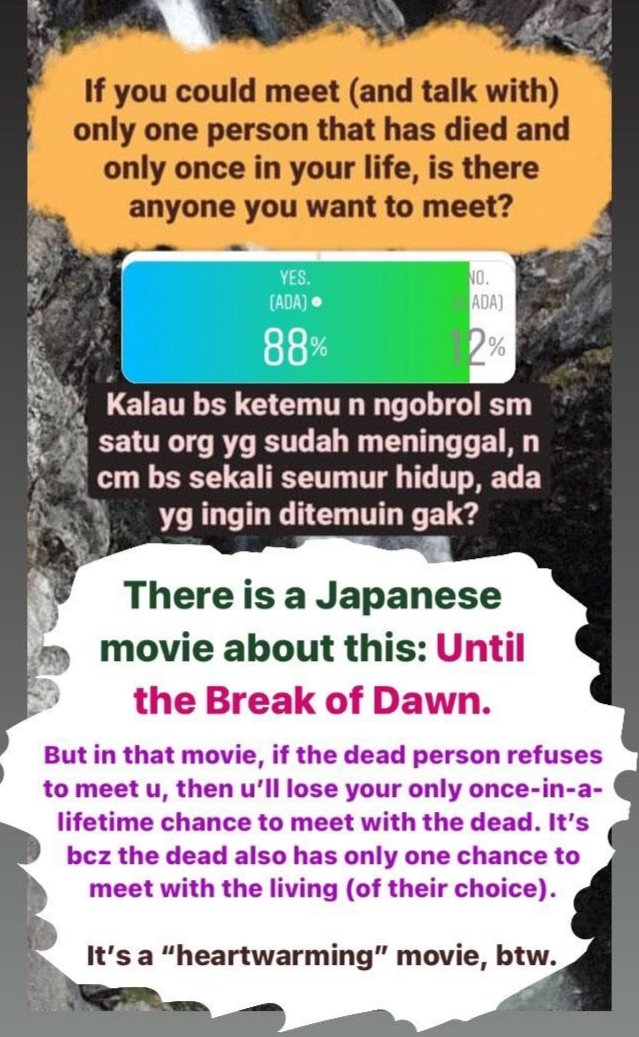 3) Until the Break of Dawn
This one is interesting too. Damn, before I continue, let me say one thing: Japanese people are really creative with their ideas when making movies and dramas. Like, they really turned every fictional idea into “reality” in their movies and dramas. The ideas are unique and wonderful. And I think it’s really amazing.

But, ok, why did I say so? This movie is about someone whose family is bestowed with the ability to connect the dead with the living. The ability was passed down through generations using a (magic) mirror. Only they were allowed to see the mirror and nobody else was allowed, otherwise there would be consequences. However, they must use that ability to help people free of charge. The way they help is by being the connector and facilitating the meeting between the dead and the living. Well, they could meet only once. And if the dead person they wanted to meet refused to meet them, then they would lose their once-in-a-lifetime chance to meet with the dead. Hence, they should choose wisely.

Well, in this movie, the guy who was bestowed with the ability met different kinds of people who wanted to meet with the dead. The stories varied and were not necessarily connected but they were heartwarming. I loved it 🙂

As for me, I don’t know who I want to meet. But maybe my late paternal grandma. I felt so loved by her back then 🙂 Or maybe my distant “cousin”? He died young but he was a good guy. I had a good memory having fun and playing with him under the rain and such when I was a kid, but then we grew apart as we grew up. Partly because I went to high school while he didn’t. I wonder how he was doing. But I wouldn’t know what to talk about with him, though 🙈😅 Or maybe my younger brother and sister who died when they were born? I don’t know. It’s tough to choose only one person, isn’t it? ^^

What about you, though? Is there anybody you want to meet? Why?

4) Yayoi, Sangatsu: Kimi o Ai Shita 30nen [Yayoi, March: The 30 Years that I Loved You]
This movie is a bit depressing, or perhaps “frustrating”, for me. Sigh. I mean, it’s not bad. Quite the opposite, it’s really good, which is why it’s frustrating. Because, like, I kinda want the characters to do things differently. LoL But, like, imagine, the guy and the girl actually loved each other. But their best friend loved the guy, and that friend was about to die, so the girl pretended to not like the guy, and instead played matchmaking trying to hook up the two. The girl ended up dying, and the two friends who actually loved each other went separate ways. Trying to pursue their dreams, getting married, having a kid, getting divorced, etc. But not really happy 😐 And the frustrating part was when the girl wanted to confess, the guy was already with another girl. And when they got divorced and the guy wanted to confess and pursue the girl, the girl was already with someone else. Frustrating, isn’t it? 🙈 Should I tell you the ending, though? Or, would that be too much of a spoiler? But I can’t really review it without mentioning the ending. LoL

SPOILER: They finally realized that they loved each other and that made me really happy. But, holy, it took them 30 bloody years for that! Gosh. I guess that’s how destiny is? If they’re the one meant for you, though you had to be with someone else, you’d end up being with them no matter how long it would take? I don’t know. But maybe I shouldn’t worry about my love life? I mean, if someone is really meant for me, or if I really am meant for someone, then no matter how old I become, someday we’d surely meet and be together, right? Well, I know it sounds like a hope and actually I’m not sure if that’s the case or if I would have someone like that in my life. But I don’t want to be bitter about it^^

Anyway, I also made a poll on Instagram. Haha Gosh, I’m such a girl of polling, huh? LoL But, well, it looks like many choose to hide their feelings. And that’s probably what I’ll do too. Especially if they look happy together, then I know I don’t want to ruin it. I guess I’m such a coward, not to mention too insecure. However, if someone likes me, I really want them to tell me and fight for me. I need them to convince me ’cause sometimes I just can’t see why someone would love me that way…

But, again, what about you? What will you do? 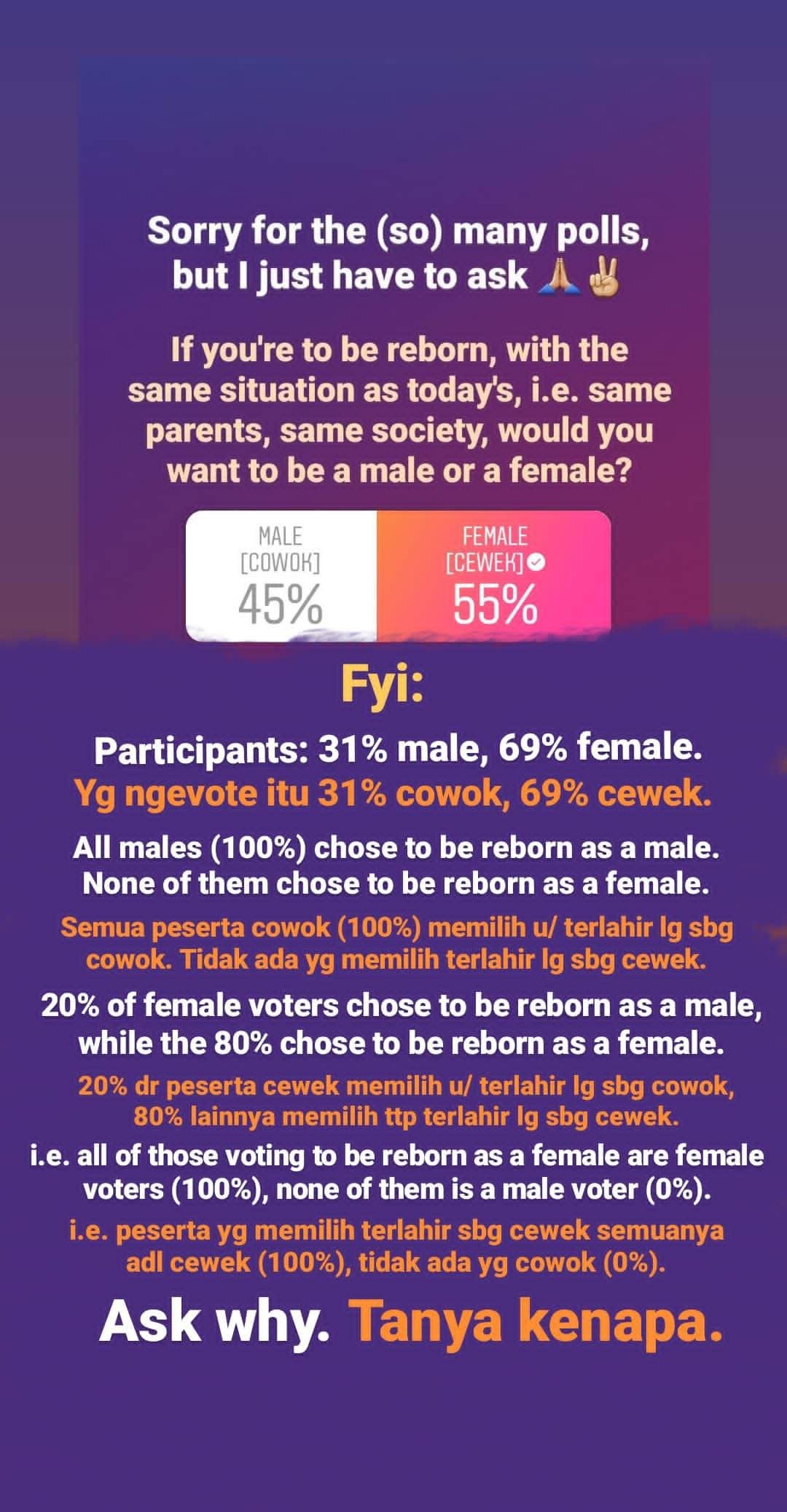 5. Shorui wo Otoko ni Shitadakede [I just became “male” in the paper]
This one is interesting too. Actually, the girl didn’t purposefully fake her gender. But the administrative stuff made a mistake and marked her application form as male instead of female. When consulting the company’s doctor, she was given the option to remain working as a male and grasp more opportunities or revealing the truth that she was a girl. She chose to work as a male and found that she indeed got more opportunities than her female colleagues.

I love this movie, though. I think if we want to educate people about how bad patriarchy and misogynism, we can do so with movies like this. It’s conveyed in a light way through the conflicts had by the characters, so it’s not really judging and full of anger. It’s more about frustration and a spirit to change the “injustice” and the “unfairness” received by female workers and female in general. So in a sense, it can be quite eye-opening and educating 🙂

As for me, I want to stay female. I don’t know. I just love being female? I feel like I can do many things and it’s cool. Many fight for and support women now, right? ^^ So yeah, with the same situation and same everything, I just want to be a female. What about you? Do you want to be reborn as a male or a female? o.O