Skip to Content
Home Blogs Reviews To hurt or get hurt: Breaking the chains.
by

I always come up with random thoughts. The other day I wondered about this thing of hurting and getting hurt. I believe that at some points in our life, no matter how hard we try not to, we will hurt somebody. And we will get hurt, too. I believe you won’t only hurt people or that you will only be hurt. Sometimes it’s both, at different times or at the same times. I’ve wondering, though: which one do we do more often?

So, well, I made another Instagram poll about this. You can see the pic here so I don’t have to repeat what’s written there. 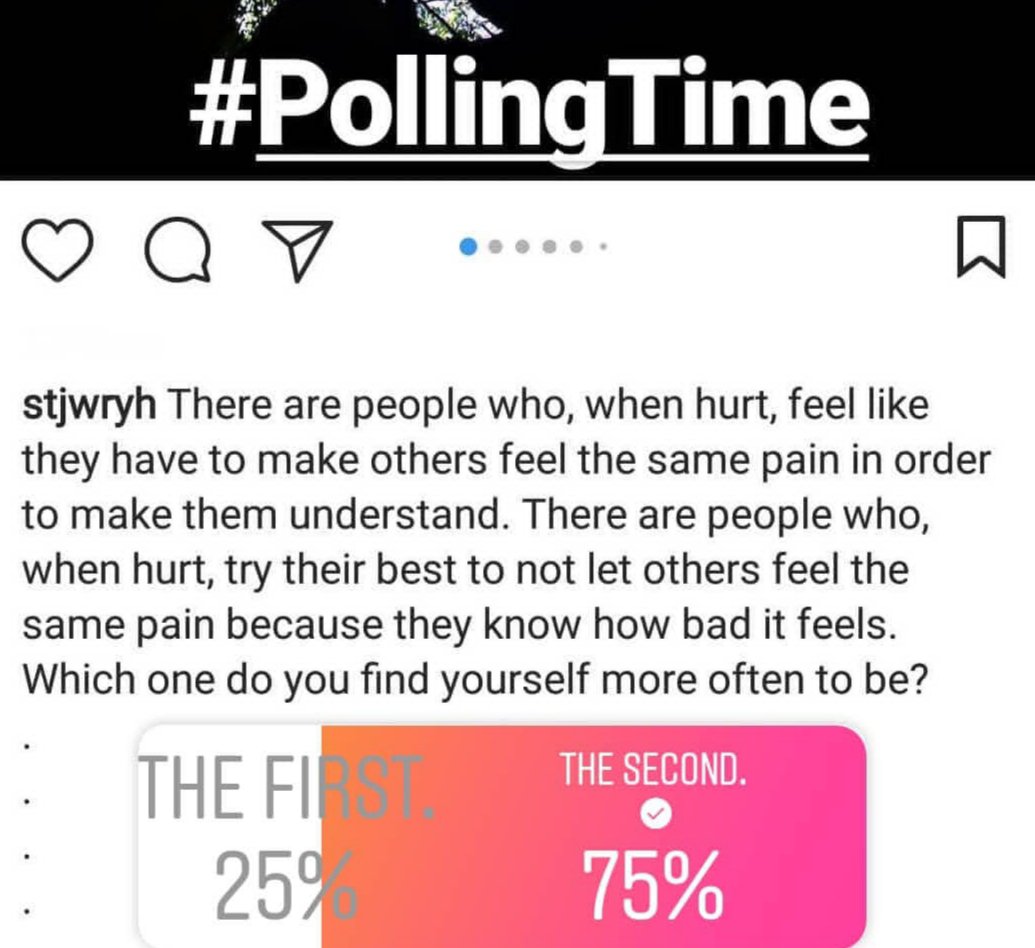 Most of my follower-friends find themselves more often to be the second type: those who, when hurt, try their best not to let others feel the same pain because they know how bad it feels. I am surrounded by good people, aren’t I? ^^

You know, I feel like hugging these people. Those who care for others this much have usually endured enormous pain themselves. They feel like they could endure all the pain but they’re not sure if others can endure it the same way so they want to protect them. Kind and good people. I’m not sure if it’s partly “masochistic” too, though 🙈✌️ We’ve made peace with the pain that we’ve come to enjoy it. Gosh, if only the scars in our heart can be seen like the wounds in our skin, maybe it’s gonna be easier to remove them. I don’t know what I’m talking about. Sometimes I feel enormous pain myself though I’m not sure what’s been hurting me. Or maybe I just can’t say it. I don’t know. I don’t want to pretend to be the most broken person, though. I don’t want to play victims either (victims of what anyway?). I don’t know, I just don’t think that I’m that good or that kind. I don’t want to be like a hypocrite. So, well, I’m not as good as people might think I am. I’d rather people think I’m bad but still can find good in me, than thinking of me as a good person and heartbroken when finding that I’m bad. It hurts.

Well, anyway, I’ve been saying that the second type is good and kind and might have been scarred. But I don’t mean to say that the first type is bad either. People do have different ways in dealing with their pain. I feel like, maybe, the first type is badly hurt that somehow they feel nobody understands them that they feel like they have to make others feel the same pain just so they can understand them. They just want to be understood. Not sure if it’s partly revengeful too, though. Feelings are complicated, indeed.

Well, I’m not going to be angelic or something like that. I’m not a saint, either. Sometimes I think we need to be like the first type, just to “break the chain”. I still believe it’s wrong to take out our anger or pain on innocent people. Like, for instance, A hurt us then we hurt B, C, D to make them understand our pain, that’s not right. BCD has nothing to do with our hurting, though they might have contributed to it or magnified its intensity. However, somehow, maybe it’s okay to hurt A the same way just to let him/her know how bad they’ve made us feel, hoping they wouldn’t do it to others, hoping they wouldn’t hurt others the same way they’ve hurt us, i.e. breaking the chains right there. But maybe it’s not the right solution. There’s no end to revenge, right? So, sometimes we do need to break the chain by becoming the second type of person, bearing and enduring all the pain, ending it at us.

When I talk about the chain, I mean to say that somehow this hurting someone and getting hurt by someone is kind of related; it is “chainful”. When somebody is hurt, whether they mean it or not, they tend to hurt others. And I learn-or realize-this when I watched a Japanese drama some time ago. So I might as well do a review.

There is this Japanese drama entitled Boku No Ita Jikan (The hours of my life). It’s about someone with ALS. It tells about the struggles and such, but that’s not what I want to focus here. I want to highlight the emotional sides. So, this guy with ALS, named Takuto, has a younger brother, named Rikuto. Both were born to a Dad who runs a hospital. And as you might have guessed, the parents expect(ed) the kids to be a successor, i.e. to be a doctor. Takuto couldn’t get into a medical school, Rikuto did. The mother seemed to pay more attention to Rikuto, since he’s the one who could fulfill the family’s wish. It turns out that Rikuto isn’t happy himself. He doesn’t get to do what he really wants for himself. As the story on ASL gets more serious, each person gets the courage to tell their feelings to each other. Takuto tells his Mom that she hasn’t really paid attention to him, that she only cares about Rikuto, but that Rikuto isn’t happy, etc. It turns out the mother isn’t happy herself; she’s tried her best to be an excellent wife raising excellent kids to be doctors for her husband; she hasn’t really lived her own life. But she hasn’t been appreciated or acknowledged properly. It seems that everybody hasn’t been happy for real anyhow. At the end, though, after communicating the problem to each other, everyone gets closer and comes to understand, make each other happy, and be happy themselves. Point: isn’t it scary that this chain of heartaches is connected? Someone is hurt and unintentionally hurts others. Fortunately, we all have chances to communicate and clear a misunderstanding, to help us understand and be understood 🙂

I especially remember how each deals with their feelings, especially Takuto. When he yearns for people to understand his feelings, he comes to understand theirs instead and finally hides his feelings to himself. What a man! As his disease gets worse, though, he finds meanings in his life. He sets his short goals so that he has something to fight for in a short amount of time. He keeps adjusting his goals to what his ALS limits his ability to do. But he’s content because he doesn’t feel useless anymore. Meanwhile, Rikuto, his younger brother, does not know how to socialize with people. He doesn’t realize that what he says can hurt others. And Takuto, knowing that his brother actually does not mean to hurt people with his words, come to understand him. He helps him to learn how to communicate better. I remember one scene where Takuto says to his Dad (and Mom? I forgot.) He says something like this, not the exact words, but the point is this. “You know, people can instantly know that I need help because they can see my condition. They can see the wheelchair. They know that I’m sick. With Rikuto, it’s different. The scar is in his heart. Not everyone can see it and so not everyone knows that he actually needs help. Not everyone can understand him.” So wise, right? And so true.

People with pain-including depression-are “hard to tell.” They can pretend to be fine and we never really know how they actually feel. They want to be understood but they are worried that they are going to be a bother. They want to reach out but they are scared that at the end they are going to hurt others and get hurt even more. It’s complicated. Sometimes I really want to understand these people but at the same time I’m afraid that I’m not patient or strong enough to deal with them. At the end, I guess I just want to protect myself. Well, I feel bad for this, but at the same time I feel like I need to do this for me myself. Because, at the end, even if I have no one, I still want to be sure that I still have me.