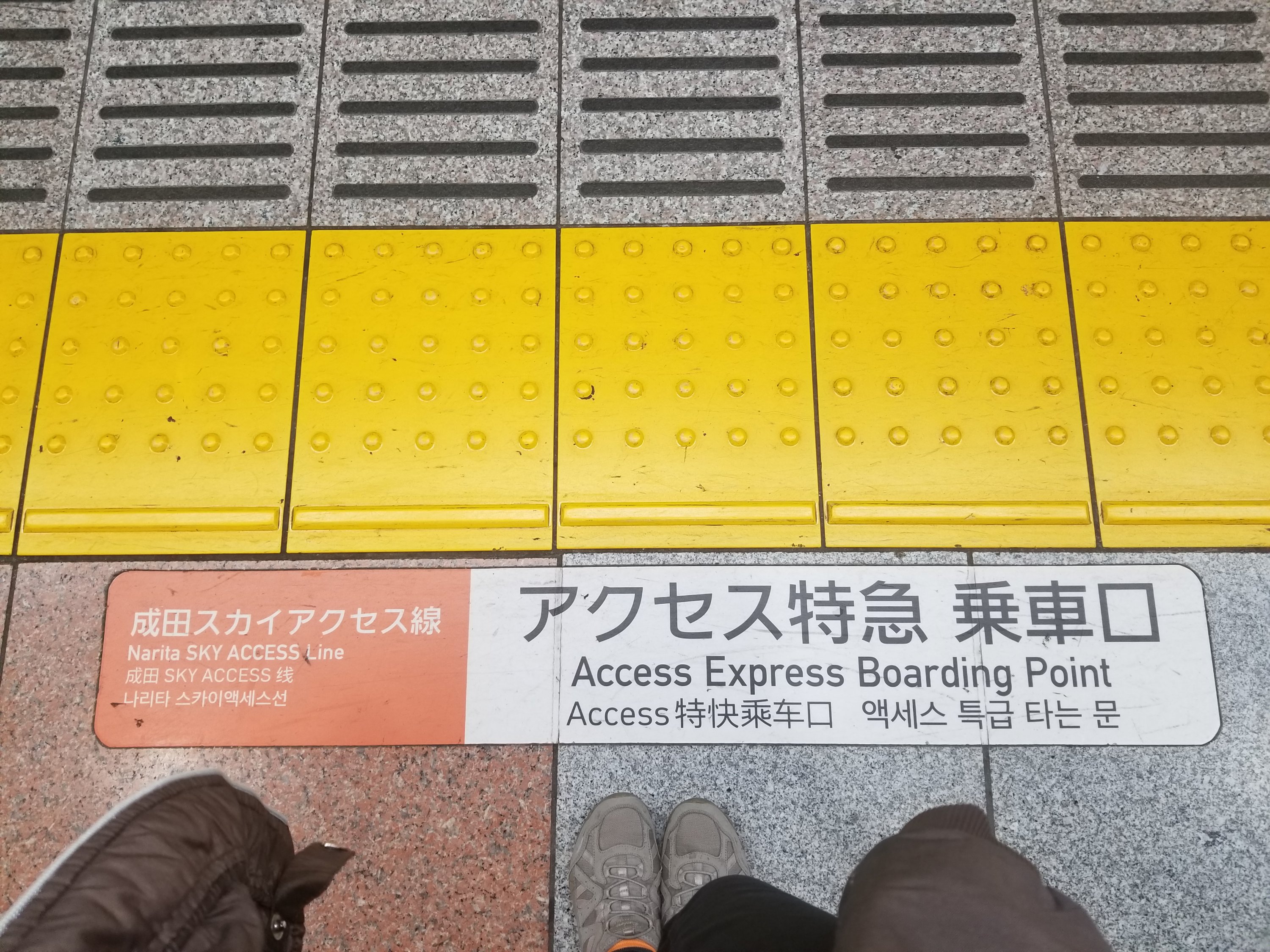 After getting the Suica card and putting my backpack in the locker rent, I went to find my train. I knew I should get into a Skyliner, the fastest one, but I seemed to get into the wrong lane. There was the intersection between the lane I was and the lane I was supposed to be but I couldn’t pass there. I needed to exit through the same entrance, where I came in, and told the officer about it so they could return the money to my already-tapped Suica card. Then I went to the other lane/platform and this time I wanted to make sure that I was on the right place so I asked the officer and they said I was correct. When I was inside, there were many people already and then there were more people coming. I noticed there were some platforms indicating the train, the destination, and the time they would arrive or depart. My friend told me I should get off in Nippori station so I made sure I was waiting on the right platform. There was a train coming but it didn’t say Nippori so I didn’t get in. But I was curious because Google Map said that was the train I was supposed to take. I was confused so I checked again and found that Nippori station was before Uedo station, where the train was usually going. I also saw some people who seemed to be Indonesians (from the hijab style and their overall appearance) but I didn’t say hi because it seemed they didn’t want to have anything to do with others (it’s my prejudice, I’m sorry. Maybe I’m just scared and worried, I don’t want them to think I’m acting too unsually friendly to someone I don’t know.) Besides, I wasn’t sure if they were tourists like me, studying or working here. I didn’t know if they knew about what I needed to know. But then I needed to know. So when a Japanese lady was getting on the train I asked her if the train was going to Nippori (the Indonesians were still waiting and didn’t get onto that train). I practiced my Japanese. She seemed unsure but then checked her phone and said yes that it was going to Nippori. She even sat next to me. I wanted to practice my Japanese more with her but she seemed busy watching videos on her phone so I just looked around: observing. Taking the train wasn’t hard actually because the announcement was made both in Japanese and English. Later my friend said that it was done so to prepare for the 2020 Olympic games, which will be held in Japan. 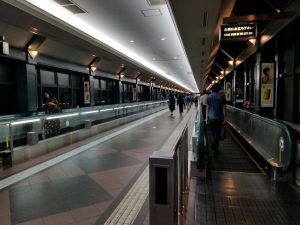 However, my friend said I was supposed to arrive faster since the train wasn’t supposed to have many stops. Apparently, later I realized, I stood in the wrong platform. I stood in Narita skyaccess line, not Skyliner -_- even though there were actually in the same line. Same line, different platforms. Stupid me, but, well, I learned something, so I am okay 😊Narita skyaccess line has several stops that’s why it takes longer to get to Nippori. Skyliner is the fastest, and thus more expensive.

When I was in the train, I listened to both the audio announcement and the info board in the train to match the name of the station where it made the stops and to predict after which stop I should get off. When I finally got off at Nippori station, I followed the exit sign and went outside. But just right when I needed the roaming service to contact my friend, the signal was gone and I didn’t get any reception. I panicked for a while. Internet was kinda my life when I was traveling alone in a new place. I mean, even if I didn’t have a friend, if I could ask Google or ask it to translate for me so I can ask people, I’d be fine. Otherwise I was doomed. So I kept walking thinking that maybe in the near area I’d get the reception but I didn’t. Meanwhile, I couldn’t believe that I was walking in Japan, like for real. I felt so blessed and happy, still, I needed to meet my friend. Hence, I tried to rebot my phone. Thankfully it worked. I texted my friend telling her where I was. She said sorry that she forgot to tell me to not exit the station. So I went in to the station again. She told me which platform I should go to. I did. I told her I was wearing pink so that it’s easier for her to spot me and I asked her what she was wearing and she said pink, too. Haha What a coincidence 🙈🙈🙈 Then we met, and we took the train. I forgot what train we took because the plan had changed due to our late meeting time so I just followed her. 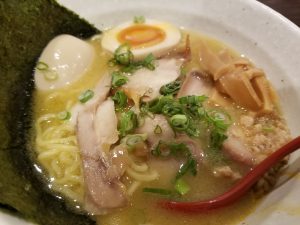 She first took me to this place called Honolu Ramen Tokyo. It sells halal ramen 😊 My friend needed to break her fast and pray and she must have thought I was hungry, too 😀 But I wasn’t fasting that day and I ate during my flight so I wasn’t really hungry. The place was not that big, by the way. It was really really tiny for me. It was a two-storey building in a corner of somewhere, and I really wonder how people could go there. But there were some signatures of Indonesian famous people like celebrities, musicians and politicians who gave their testimony that the place was really great and that the food was really おいし(oishi=delicious). But for me it was so-so. I don’t know, maybe because I wasn’t really hungry and a bit tired so it didn’t really taste that great (sorry, I have a weird taste. But I believe it must be tasty in general so please give it a try. I’d love to give it another try!). We ordered ramen, but honestly I think our indomie tasted better. Haha For me it was too salty, and the egg was not fully cooked so I could still see the aqueous yolk, which I don’t really like. I love fully cooked or hard boiled eggs. The soup was creamy with, what seemed to me, yolk, too. I think what I liked the most was the nori or the dry seaweed. I always love it whether in ramen or in sushi. It always tastes great 😊 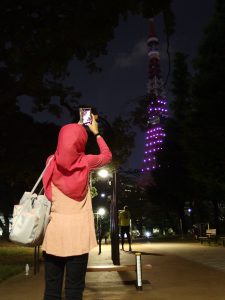 When we were eating, my friend still thought of letting me watch the movie I had told her I really wanted to see. She must have thought I’d be disappointed if I didn’t get to watch it. But I managed to convince her that I was okay with not watching it. Well, I wouldn’t understand anyway since there was no subtitles. Besides, with the limited transit time that I had, I’d rather go around exploring different places than spending two-hours sitting in the cinema watching a movie I didn’t understand. Well, I love Ikuta Toma and I really love to support him by watching his movies but sometimes we must choose. And I choose to see more of Japan because somehow I know I can see his movie another time. (I’m sorry Toma-sama, please don’t hate me ☹ ).

So after that, my friend decided to take me to Tokyo Tower. I was really happy. I mean, at that moment, all I could remember was this scene of the drama where Ikuta Toma was the main character. It was Osozaki no Himawari (遅咲きのヒマワリ～ボクの人生、リニューアル～ , Osozaki no Himawari ~Boku no Jinsei, Renewal~ , Late Blooming Sunflower ~My Life, Renewal~). It was a good drama, picturing daily life yet in an extraordinary way. I might write about it in another post (if I can make time) but now let me just tell you why I love Tokyo Tower so much due to this drama. In the last episode, he had this scene where he confessed his feelings to the girl that he loved. It’s not something like “I love you” and “I love you, too.” It’s just like you finally realize that you love the person and think that person loves you too even though you’re not so sure about it, so you’re really happy to find out that you’re actually right; i.e. your feelings are returned. That’s how the scene is. It makes me really happy. I mean, for me, it’s really sweet 😊 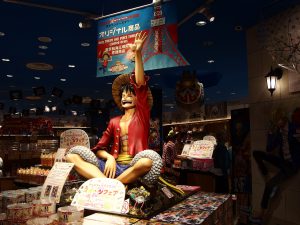 But when I browsed about Tokyo Tower, I found and finally remembered that they had One Piece Deck there! How could I have forgotten about that?! I became even more excited!!! Too bad I had so little time. It’s getting late, too. And I couldn’t deny that I was exhausted. My body kinda bertrayed me; it demanded a rest, quickly. So I decided not to go into One Piece Tower because it wasn’t free, and if I had to pay, I would want to spend it really well, like exploring every corner of the deck, but I really had no time or energy for that so we just took some pictures. My friend was really patient because she was willing to take my pictures repeatedly. I know I was kinda perfectionist and annoying when it came to taking pictures so I was really thankful for her patience. And thankfully, there was this One Piece store in the lower deck. They had many One Piece decorations so I could pose with them. I intended to buy a postcard, though, but they didn’t have it so I ended up not buying a thing.

Then we took a bus (not a train) and headed to Shibuya. I took pictures with the famous Hachiko statue. It wasn’t like I had expected. Sorry, but it looked so “ordinary”, maybe because it was a bit dark, I don’t know. Many people (including me) were still lining up to take pictures with it, though. So I’m just glad that I did take pictures with it. Well, sometimes happiness is absurd. We were happy with something just because everybody seemed to be happy with it 🙈🙈🙈 I found Shibuya exciting, though. It’s late but many people were still moving. The place didn’t sleep for real. And, oh, I was really fascinated to see Japanese people this many and in person. I really felt like living my life in the movies and dramas that I have watched. I felt blessed. There was this cute guy that I saw in Shibuya, too. Haha He was somehow in the hyperlapse video I was taking. Hhe

When in Shibuya, I was also still trying to find a cinema and see if they played my man’s movie, Yuuzai. I mean, even if I didn’t get to watch the movie, I was hoping to take pictures with the ad billboard in which he (Ikuta Toma) must be in it. Unfortunately, I didn’t find one. The cinema we checked didn’t play the movie ☹ So I just told my friend that I wanted to go home because seriously, I was really really tired and exhausted. I can’t lie and I can’t deny it. I should treat my body well and grant their wish respectfully, too, right? They had tolerated my excitement and let me explore Tokyo by walking a lot even after such a long flight, but I have to realize that they have their limits, and the best medicine when we feel tired is rest so that was all I wanted to do at that time, so we headed to my friend’s home.

Then,… well, I’ll continue this transit story in another post because, apparently, this post has gotten so long already. Hhe