When I arrived at my friend’s home, her husband and her son were already asleep. I felt really bad that she couldn’t spend the day with her family because of meeting me and guiding me around Tokyo during my short transit. But I couldn’t undo what I had done. So when I arrived, I just prayed and slept. My friend didn’t. She said she would just prepare the meal for Suhoor (the meal we Muslims eat before prayers at dawn when we are fasting) and prepare the meal for the Iftar (the meal we ate to break our fast) with the Muslim community later that day. We came home around midnight and the dawn was around 3 a.m. so were supposed to eat before that. I had slept probably for around 1 hour and a half when my friend woke me up for Suhoor. So we ate, I finally met her husband. Then I just couldn’t go back to sleep. I didn’t want to oversleep. So I just brushed my teeth and washed my face, performed the dawn prayers, and then prepared to go back to the airport to catch my flight. I didn’t even take a shower, I didn’t even change my clothes. Some people might think I was filthy, but, well, I was okay with it. I was not the type who showered so often or changed clothes so often anyway, so maybe that’s why I could survive traveling and feel okay with it. So I was still in the same clothes as I had been in the previous day. Because if I were to take to a shower, I really wanted to take my time. I didn’t want to rush myself. 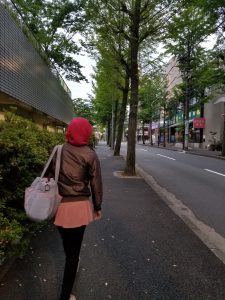 Well, actually that morning I had planned to stroll around on foot before coming back to the airport. I saw Google map and there was this small river nearby my friend’s apartment. Too bad, I didn’t get the chance. Around 5, I just told my friend that I wanted to go back to the airport because I didn’t want to be late so I wanted to catch the first train. I told my friend that she didn’t have to see me off in the airport because, well, she’d missed her time with her family for taking me around Tokyo. She also had to spend extra money to take the trains and buses for that purpose, so I didn’t want to burden her even more. But my friend was worried so she wanted to make sure that at least I wouldn’t get lost and could be in the airport on time. We stopped at this one station where we’re hoping to get in the airpot limousine bus (basically a shuttle) to Narita. But when we found it, the driver said it had been full and left. We panicked because we were scared that I’d miss my flight. My friend even thought that maybe the driver said it had been full thinking that she’d also get on the bus. She said maybe she should’ve said いち(ichi-one), for one person. Maybe there was a seat. But contemplating like that did us no good so we browsed Google map again on how to get to Narita quickly because my flight was scheduled to depart at 9.30a.m. And it was already nearing 6am and it took around two hours to get to the airport. So we were really anxious. My friend was worried if I took the trains but still had to transfer I’d get lost and miss my flight because there was no telling which one is the regular train and which one is the express one. Well, the locals can tell the difference, but I couldn’t (remember how I didn’t get onto the Skyliner?). Hence, we couldn’t risk it. It’s safer to take the shuttle because it was direct and there was no transfer. Strangely, when my friend browsed there was no more options for the shuttle but when I browsed there was a shuttle option near a certain station, with which my friend seemed to be familiar because when I told her about it she was lit up and said she knew the place better than the previous one where we tried to catch the shuttle but couldn’t. Thus, we decided to take the train to Tama Plaza (If I remember correctly) to try to get onto the shuttle to Narita from there. We even changed lane to get onto the express train to get there quickly because Google map showed that the shuttle would leave around 6 to arrive in the airport around 8.05 so we really didn’t want to miss it again. 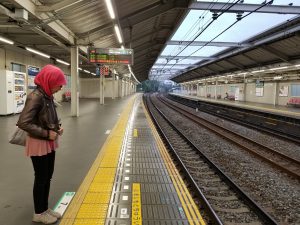 When we exited Tama Plaza station, we followed direction to the airport shuttle, but we got the one to Haneda airport, instead of Narita, so we asked the officer about the one heading to Narita airport and he gave us the direction. Then we followed it and found it. Thank God. There were some people already. I was actually scared that all the seats have been booked and there was no seat for me. I kept praying. But I was wondering if I could buy the ticket using Suica card or not (since I still had some money in it). So my friend asked the guy in the counter about that, and unfortunately, Suica card can’t be used there, and thankfully I still have some cash so I could secure one seat to Narita airport. We felt so relieved now that we knew I would get to the airport on time and thus wouldn’t miss my flight. My friend was waiting with me for the shuttle to depart. When it was time, she sent me off until I got inside the shuttle. She was so kind and nice I really don’t know how to return the favor. God bless her souls and the people that she cherishes.

I thought we should sit based on the number we got when waiting for the bus to depart. It turned out that the number was only to decide who got to get on the bus first. Basically, if you get on the bus first, you get to choose which seat you want. I thought the seats were numbered, I was wrong. And I thought somebody would sit beside me. It turned out that everyone got two seats for one person. So the bus has two lanes. Each lanes has two seats, right? But only one person sits in each row of the lanes so basically we sit alone. Well, maybe that’s for the passenger’s comfort, but again, what a waste. Somebody could need a seat to Narita and is in a hurry but he won’t be allowed to board because the bus is considered “full” even though there are literally empty – unused seats that are available. *Sigh 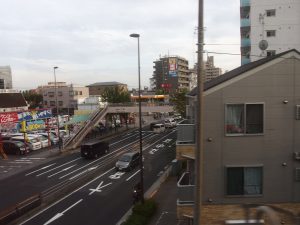 But, well, in the bus, I was looking out to see Japan’s landscape, just like I did when I was taking the trains. I think somehow I always find it fascinating, because, once again, I felt like I got to see all those scenes I watched in the movies and dramas by myself, in person, with my own eyes. I often had these thoughts in my head, “That’s how the houses are. Maybe they made movies there. There is a river. I wonder if they made movies there. Etc.” I know some might think I’m silly but, well, I get excited easily, so I was just happy 😀

Then when I arrived in the airport, I went to the info desk to ask about the location of the locker rent. She gave me some directions but when I arrived it was not the locker rent where I had put my backpack. I went back to the information center and explained it. I even showed my receipt and she seemed happy because that meant we could find the exact location. She gave me the directions. I followed the directions while also trying to remember the location myself. When I found it, there two foreigners in the counter. I wasn’t sure if they were trying to rent the locker or if they were trying to retrieve their baggage, but I didn’t ask because, well, I didn’t want them to think I was bothersome or trying to meddle because that was not my intention. I followed the instruction of how to retrieve the my bag. I thought I was gonna be charged another 200 yen because if it was 200/yen per day and after midnight it was counted as a new day, then they should only charge m for two days, right? So because I was initially charged only 200 yen, I thought I was going to be charged the same amount. I learned it wasn’t the case. When I tapped my Suica card, I found that I was charged 300 yen. I wasn’t sure how or why but I didn’t really care anymore. I was in a hurry. 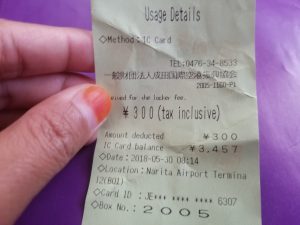 So afterwards, I rushed to find JAL counters because that’s the airplane I was taking. I already had my boarding pass so I just approached the lady and asked if I should check in again and get a new boarding pass. She said I didn’t need to and just wrote the gate on the boarding pass for me. Then I passed the security for the screening thing. Then, voila, I found a bookstore inside so I thought I’d ask if they had a postcard. Again, it’s a chance to practice some Japanese. Haha I said, “ポストカードがありますか” (postokardo ga arimasuka? Is there a postcard?) and the young-nice-beautiful shopkeeper lady said, “あります” (arimasu, yes, there is). Whoa, I felt so happy. Haha I mean, she understood me! I think that’s how interacting with whatsocalled nativespeakers of the language we are learning feels like. (English is different, though because people across the world speaks it). She showed me where the postcards were. I noticed that each costs 100 yen. I bought two because I promised to send one to a friend I took Japanese class with and I wanted to send one to myself, too. Then I went to the cashier and paid. She gave me the receipt and I was about to leave in a hurry. Maybe I was just concentrating too much on wanting to practice my Japanese, like saying “thank you”, “if you’ll excuse me”, etc. that I lost my focus. I mean, I almost forgot to take the postcards with me. LoL The shopkeeper lady reminded me of it and I was relieved and thanked her again and again. I bowed. I said thank you. I was really trying hard to practice what I have learned.

Then, in doing all that, I almost bumped into another person. A Japanese. I might have looked as if I was panicking and in a hurry (well, I was in hurry going to find my gate and board). The guy asked me if I was okay in Japanese. Whoaaaa. I understood him perfectly well and could respond as well. I felt really like playing a character in a Japanese drama or movie T_T I felt so happy T_T

Then I guess that’s it. I went to my gate. I boarded. And I flew to Manila, Philippines. Another adventure was awaiting 😊

PS: I didn’t get the chance to return my Suica card or exchange the money back to USD because I thought I might need to use it again when I transit there again later on my way back to USA.